‘He is trying too hard’: Psychologists sound off on Trump’s ‘ridiculous’ handshake 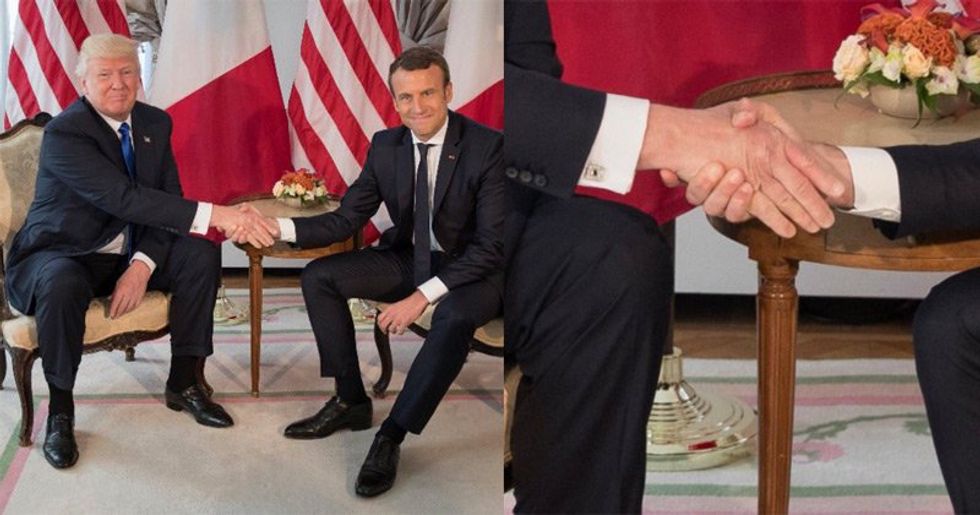 Donald Trump’s handshake is the stuff of legend—but not necessarily the good kind. In fact, as observed throughout the president’s first trip abroad (as well as his prior meetings with heads of state), Trump’s handshake—unlike his policies—has resonated with one clear message across the globe: As one psychologist put it, “I’m the alpha.”

“It goes down to asserting dominance,” University of Illinois associate psychology professor Florin Dolcos told the Huffington Post. “Why he wants to do that? I don’t know. It looks, to me, like he is trying too hard.”

Hours later, Trump tried to reestablish dominance, reaching out to Belgium's King Philippe as Macron walked toward the group. According to Dolcos, that was a strategic move intended to intimidate Macron.

“That’s a signal Trump was sending: ‘This is where you should come first because I’m the alpha here,’” Dolcos said. “‘Initiated with the other guy.’”

“It’s an intimidation tactic. There are self-preservation strategies and intimidation is one of the main ones,” Frank Bernieri, an associate professor in the psychology department at Oregon State University told the Huffington Post.

“He pretty much says that’s what I do to make a deal,” Bernieri said.

Sam Nurnberg, an ex-Trump aide, told the Huffington Post the president is jus “very cognizant of the optics of what it looks like at these multilateral meetings with world leaders.:

“I even think it’s is symbolic to the America First theme of his presidency and campaign,” Nurnberg added.