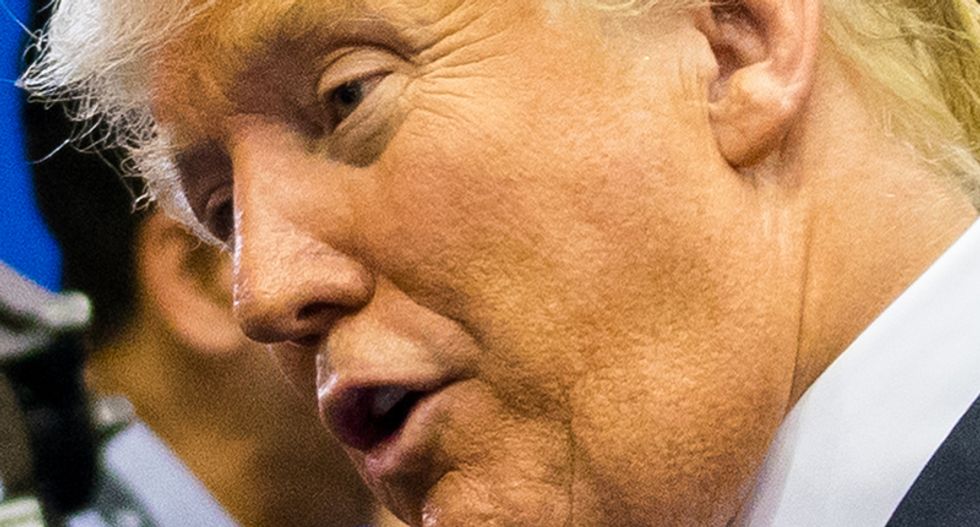 President Donald Trump betrays a superficial understanding of many of the topics on which he's asked to comment, but few topics conjure up more incoherent and vacuous statements by him than history.

Trump has expressed admiration for Andrew Jackson, but he doesn't seem to know much about the nation's seventh president -- a slave owner who died 16 years before the Civil War began.

"I mean, had Andrew Jackson been a little later, you wouldn't have had the Civil War," Trump told the Washington Examiner's Salena Zito. "He was a very tough person, but he had a big heart. And he was really angry that -- he saw what was happening with regard to the Civil War. He said, “There's no reason for this.” People don't realize, you know, the Civil War — if you think about it, why? People don't ask that question, but why was there the Civil War? Why could that one not have been worked out?

Trump has been roundly criticized for his lack of understanding of the country that elected him to serve as chief executive -- but he's previously made even less erudite comments about historical figures.

The Washington Post's Bob Woodward asked Trump last April to comment on why the first Republican president, Abraham Lincoln, had been successful and why Richard Nixon had not.

"Well, I think Lincoln succeeded for numerous reasons," Trump said. "He was a man who was of great intelligence, which most presidents would be. But he was a man of great intelligence, but he was also a man that did something that was a very vital thing to do at that time. Ten years before or 20 years before, what he was doing would never have even been thought possible. So he did something that was a very important thing to do, and especially at that time. And Nixon failed, I think to a certain extent, because of his personality. You know? It was just that personality. Very severe, very exclusive. In other words, people couldn’t come in. And people didn’t like him. I mean, people didn’t like him."

Less than a year later, Trump seemed to have forgotten the Republican Party was known as "The Party of Lincoln."

"Great president, most people don't even know he was a Republican," Trump said at the National Republican Congressional Committee Dinner. "Does anyone know? Lot of people don't know that."

The president also seemed unsure of the significance of another Civil War-era figure, Frederick Douglass, earlier this year during a Black History Month event.

"Frederick Douglass is an example of somebody who’s done an amazing job and is getting recognized more and more, I notice," Trump said. "Harriet Tubman, Rosa Parks, and millions more black Americans who made America what it is today. Big impact.”

He displayed similarly superficial knowledge of the Rev. Martin Luther King Jr. at that same event, before changing the subject to a more familiar topic -- himself.

Conservative Daily Beast columnist Matt Lewis lit into the Republican Party for frittering away their chances of taking control of both chambers of Congress in the upcoming November midterms, claiming they only have themselves to blame because they are still in the thrall of Donald Trump.

In his column, Lewis bluntly asked, "What the hell was the GOP thinking pushing such garbage candidates?"

"Karl Rove says Texas’ abortion law is too extreme" was first published by The Texas Tribune, a nonprofit, nonpartisan media organization that informs Texans — and engages with them — about public policy, politics, government and statewide issues.

Liz Cheney says she will do whatever it takes to keep Donald Trump from the White House, even if it means leaving the GOP

By Matthew Choi, The Texas Tribune

U.S. Rep. Liz Cheney said she would do “whatever it takes” to make sure former President Donald Trump is not the GOP presidential nominee during the 2024 elections, including stumping for Democrats running against election deniers running as Republicans.

When asked by Texas Tribune CEO Evan Smith if she would consider running for president toward that end, the Republican congresswoman reiterated she would do everything in her power to prevent the former president from representing her party in the next presidential election.

“I certainly will do whatever it takes to make sure Donald Trump isn't anywhere close to the Oval Office,” Cheney said during the closing night of The Texas Tribune Festival.

Cheney, who lost to a Republican primary challenger in August but will continue as vice chair of the House Jan. 6 Committee until she leaves office in January, said she continues to identify as a Republican, celebrating the legacy of the likes of Ronald Reagan and Dwight D. Eisenhower.

But she said she would no longer be a Republican if Trump gets the party’s nomination in 2024.

“I'm going to make sure Donald Trump, make sure he's not the nominee,” Cheney said. “And if he is the nominee, I won't be a Republican.”

Cheney maintained that she is an ardent conservative on policy issues, voting in near lockstep with Trump’s legislative agenda when he was in office. But she warned a House Republican majority would give outsized power to members who have been staunch allies of the former president and his efforts to keep the White House, including U.S. Reps. Marjorie Taylor Greene, Lauren Boebert and Jim Jordan.

Cheney excoriated Trump for his failure to call off rioters at the U.S. Capitol on Jan. 6, 2021. She said without equivocation that any decision by the investigating committee about whether there should be criminal prosecution would be unanimous across the seven Democrats and two Republicans. She did not say whether the committee would decide in favor of a criminal prosecution.

“One of the things that has surprised me the most about my work on this committee is how sophisticated the plan was that Donald Trump was involved in and oversaw every step of the way,” Cheney said. “It was a multipart plan that he oversaw, he was involved in personally and directly.

“While leaders in Congress were begging him, ‘Please, tell the mob to go home,’ Donald Trump wouldn't,” Cheney said. “And just set the politics aside for a minute and think to yourself, ‘What kind of human being does that?’”

The committee is gearing up to wrap up its work in the coming weeks and is slated to meet this Wednesday for another public hearing, offering no details about what will be discussed then. She said next week’s hearing is unlikely to be the committee’s last, despite committee Chair Bennie Thompson, D-Miss., suggesting the opposite earlier this week.

When asked if she would like Trump to testify before the committee, she paused for a moment before offering the following: “Any interaction that Donald Trump has with the committee will be under oath and subject to penalty of perjury.”

Cheney suffered a precipitous loss in the Republican primary for her Wyoming seat for her role on the committee, and she said Saturday that she would not vote for the Republican nominee for her seat, Harriet Hageman, in the general election.

But she challenged the audience not to question her ability to keep fighting against Trump after she leaves the House.

When asked about her own presidential ambitions, Cheney demurred.

“It's really important not to just immediately jump to the horse race and to think about what we need as a country,” Cheney said.

Her criticisms aren’t limited to the former president. Cheney also flatly said she does not believe House Minority Leader Kevin McCarthy should ever become Speaker of the House, which would put him second in line to the presidency behind the vice president.

“At every single moment, when our time of testing came and Kevin had to make a decision … he’s made the politically easy-for-him, or the politically expedient, decision instead of what the country needed,” she said.

But Cheney didn’t give up hope in her party, saying: “I think we have to have a Republican Party that can be trusted to fight for” issues such as limited government and strong national security.

Cheney’s father, former Vice President Dick Cheney, is another vocal opponent of Trump. He called the former president a coward and the greatest “threat to our republic” in history in a campaign ad supporting his daughter’s primary run. Liz Cheney said that her father offered her a piece of advice on New Year’s Day this year: “‘Defend the republic, daughter.’ And I will,” she said.

This article originally appeared in The Texas Tribune at https://www.texastribune.org/2022/09/24/liz-cheney-texas-tribune-festival/.