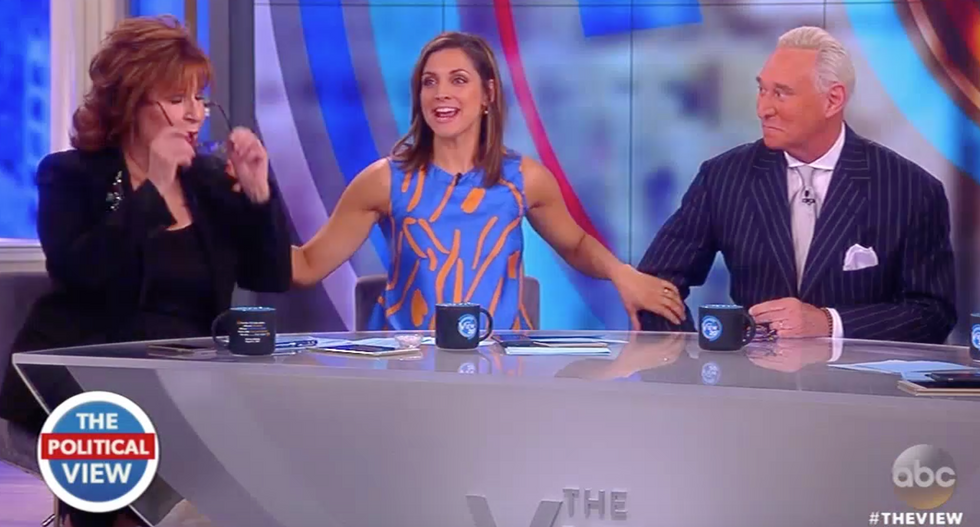 Political operative and self-described “dirty trickster” Roger Stone appeared on “The View” Friday for a wide-ranging interview about the ongoing investigations into the Trump campaign’s ties to Russia, his Richard Nixon back tattoo and even Sen. Al Franken (D-MN).

Co-host Joy Behar led the interview, confronting Stone over whether he “urged Donald Trump to fire Comey,” as some reports suggest.

“Did you, or did you not?” Behar pressed.

Stone hedged on Behar’s question, insisting he “wouldn’t comment on it” one way or another, before insisting he speaks with the president occasionally, but “not everyday.” Stone’s response contradicts Trump’s own claim that he has “not spoken to Roger in a long time”—which the president made on Twitter Wednesday.

“He knows my views on Comey,” Stone continued. “I would have fired him five seconds after I took my hand off the Bible.”

Stone went on to call the ongoing investigation into possible collusion between Trump campaign officials and Russian operatives a “scandal without evidence,” before insisting he wants to testify and is “already thinking about what [he is] going to wear.” He also argued Attorney General Jeff Sessions’ is too partisan to lead the investigation, and should be replaced by a special prosecutor.

Clashing with Behar, Stone argued Democrats have targeted him in a public setting.

“I have been, in both public session, both the House and the Senate, Sens. [Diane] Feinstein, Mark Warner, Al Franken—who wasn’t funny as a comedian, he’s even less funny as a senator.”

“He’s hilarious and he’s brilliant stop it,” Behar shot back.

"Hang on, let me give a big eye roll to that one," Behar replied.