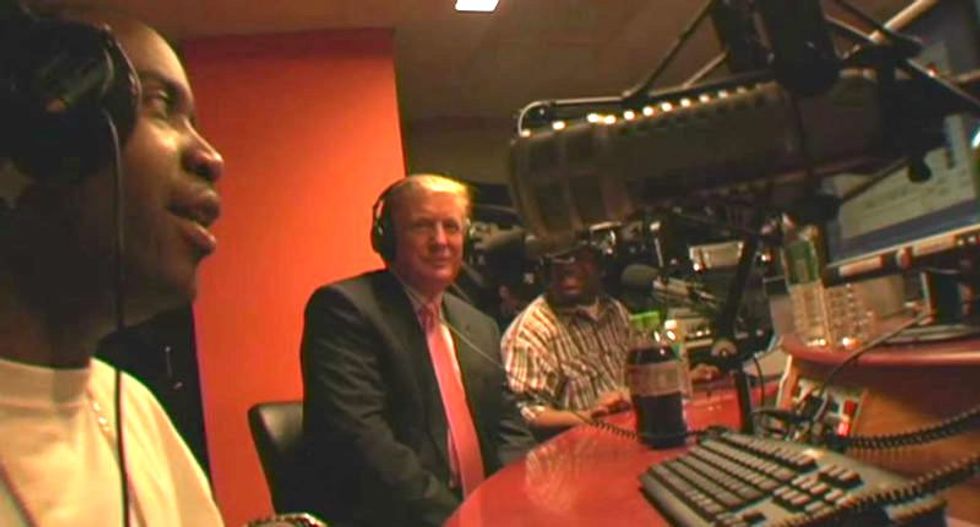 In the past week, President Donald Trump has met with the Pope and the king of Saudi Arabia, but it's a more-unlikely meeting from a decade ago that's made headlines among hip-hop fans.

In a rare interview with the popular hip-hop website Mass Appeal, DJ Whoo Kid, the producer behind the success of rapper 50 Cent, discusses meeting Trump a decade ago -- and how little the man seems to have changed since then.

At the time, a younger Donald Trump Jr. was reportedly obsessed with G-Unit, and most especially with 50 cent. According to DJ Whoo Kid, Trump (senior) decided to go onto the DJ's radio show to impress his son.

In characteristic Trumpian fashion, the then-Apprentice star didn't call ahead, and decided to surprise the DJ and radio host on what turned out to be "Drug Dealer Weekend" -- a weekend of interviews with dealers discussing their wares and the danger associated with them.

The DJ got a call from downstairs announcing that Trump was waiting for him -- and that's when all hell broke loose.

Despite having a bunch of drug dealers on, DJ Whoo Kid never told the future president what the show's theme was, and instead let them all appear on-air together.

The DJ told the Mass Appeal interview that he could tell Trump was uncomfortable with the men surrounding him, but that he didn't budge.

"This white guy, who is super-rich, is not leaving," DJ Whoo Kid said. "Because it’s uncomfortable for him to leave.  He’s like, 'You know what? I’m gonna knock this out. F*ck it.'"

Nonetheless, the situation had an element of hilarity for those involved.

"This is like, Tony Yayo is up there, this drug dealer from Connecticut, and Donald Trump and this other weed dealer," the DJ told his interviewer. "We’re all partying for like an hour. I never told Trump that it was Drug Dealer Weekend. He hung out and 50 Cent called in to keep him comfortable."

"How am I supposed to know," he concluded, "that I’m gonna have the future dickhead president of America?"

According to the Mass Appeal and DJ Whoo Kid, Trump apparently hasn't aged, and is a "g*ddamn clone" who "looks exactly the same as he did 10 years ago".