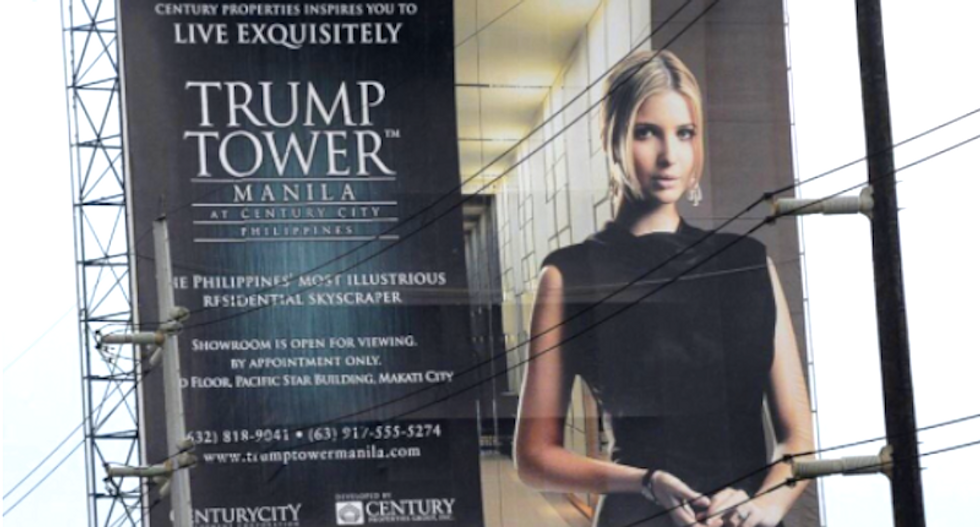 Officials with both the State Department and National Security Council were reportedly caught by surprise by Trump's invitation, which he made during a "warm" and "very friendly" phone conversation with Duterte -- who has overseen a vigilante "war on drugs" that has killed thousands.

While the invitation surprised many, the real reason for the U.S. president's friendliness toward the Philippine strongman might be looming over Manila -- where a new Trump-branded residential development is set to open soon.

Ivanka Trump -- the president's daughter and a White House official -- appeared in a billboard advertisement and other promotional materials in Manila for Trump Century Tower, which is currently showing apartments starting at $160,000 ahead of its opening.

The Trump Organization said Monday morning the billboard had been removed several years ago, but the Trump-branded development is near completion.

The $150 million tower is a joint venture between the Trump Organization and Century Properties, which was founded by developer Jose Antonio -- who Duterte tapped in October as the Philippines’ special envoy for business and trade to the U.S.

Its interiors were designed by Armani, and the 57-story Trump-branded residential tower is a few blocks away from the Forbes Tower office building.

The younger Antonio boasts of the friendship he's developed with Eric and Donald Trump Jr., who have taken over the family business from their own father while he serves as U.S. president.

Trump who agreed to put his name on the Manila project in exchange for a multimillion-dollar payment up front, along with up to 25 percent of the developer’s revenue over a number of years.

Those payments could violate the Constitution’s Emoluments Clause — which prohibits office holders from accepting gifts or payments from foreign states -- and the project itself presents a terrorism risk.

Duterte, who claimed Trump previously invited him to New York and Washington during a Dec. 2 phone call, has threatened to bar U.S. troops from his country.

But Duterte said he reassured Trump that he would maintain ties with the longtime Phillipine ally after the president-elect promised not to interfere with his violent crackdown on suspected drug dealers and users.

Update: The story has been updated to include statements from the Trump Organization about the billboard.