Jake Tapper calls out GOP hypocrisy over Kathy Griffin photo: 'Mocking the disabled' should be condemned too 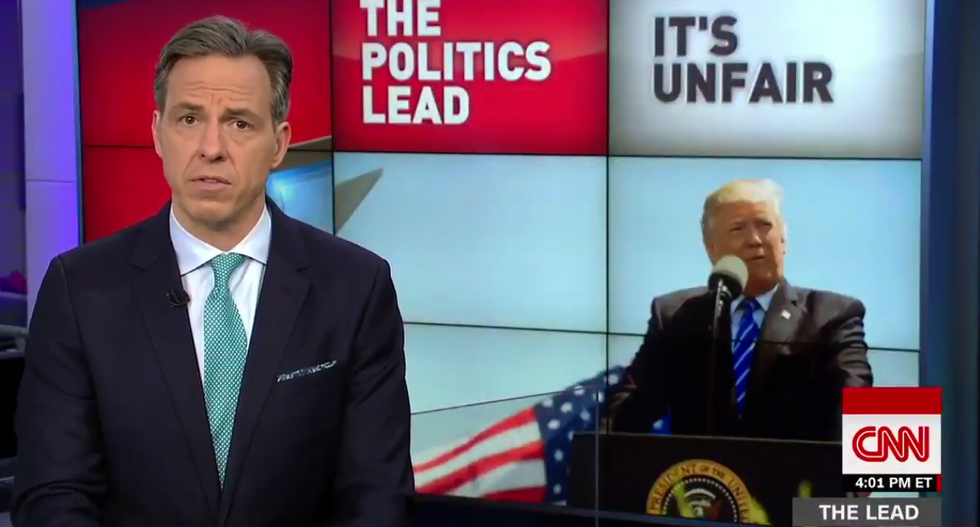 CNN’s Jake Tapper on Wednesday nailed the hypocritical outrage over Kathy Griffin’s controversial severed Donald Trump head photo, arguing while her display was clearly “disgusting and offensive,” some of the president’s own behavior should be condemned as well.

“Indecent behavior should be condemned,” Tapper said in a tweet Wednesday afternoon. “Including not just faux presidential beheadings but, said, mocking the disabled or denigrating POWs.”

Indecent behavior should be condemned -- including not just faux presidential beheadings but, say, mocking the disabled or denigrating POWs
— Jake Tapper (@Jake Tapper)1496252721.0

Trump has done both those things. In November 2015, Trump—then a leading Republican candidate for president—mocked New York Times reporter Serge Kovaleski after growing frustrated that Kovaleski contradicted Trumps as yes unproven claim that “thousands” of Muslims in New Jersey celebrated the 9/11 terror attacks. A few months earlier, in July 2015, Trump declared former POW Sen. John McCain (R-AZ) was “not a war hero” because McCain was captured and Trump likes “people who weren’t captured.”

Tuesday, Tapper condemned Griffin’s photo—which featured the comedian holding a severed Trump head covered in blood. Griffin quickly apologized for the image, but has since lost a sponsorship and been removed from CNN’s New Year’s special.

For those asking, I said on air that I thought the beheading imagery by Griffin about the president was disgusting and inappropriate.
— Jake Tapper (@Jake Tapper)1496180943.0

He also made is clear that no one was defending Griffin’s image.

@SteveGethin I can rule out that anyone I spoke to or heard from in any way thought it was anything but disgusting and offensive
— Jake Tapper (@Jake Tapper)1496259267.0