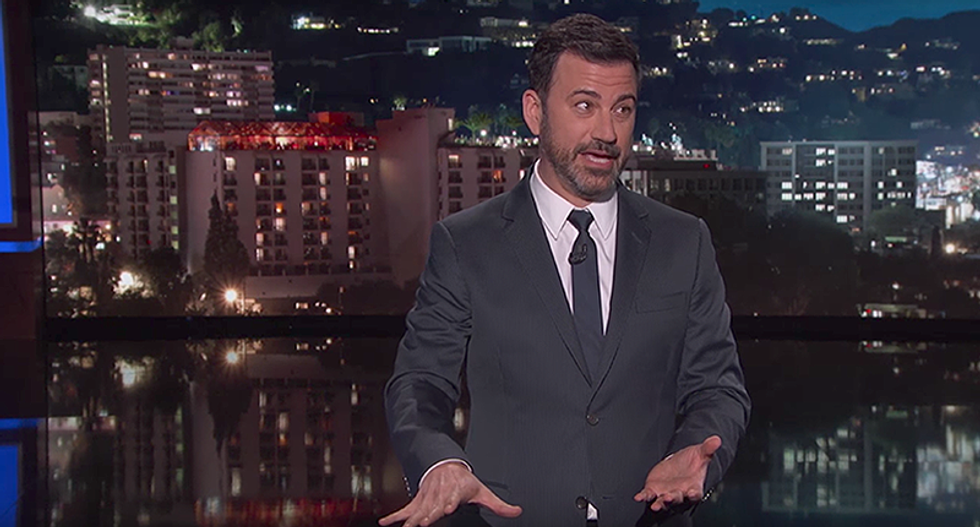 Over the weekend, President Donald Trump joined the Saudi royal family laying their hands upon a glowing decorative orb at the Global Center for Combating Extremist Ideology. The internet went nuts with conspiracy theories and science fiction fantasies. Jimmy Kimmel had the true explanation, however.

"This is, without question, the strangest thing I've ever seen a president do," Kimmel said on Monday's "Jimmy Kimmel Live."

Kimmel noted that it looked like a David Blaine special with lights and music as the men walked into the room. "Maybe a sex scene out of that movie with Nicole Kidman and Tom Cruise, you know?" he asked. "Eyes Wide Shut."

But "with the Saudi house music thumping," the men laid their hands upon the glowing orb. "And he moved on that orb like a bitch," he continued. "You know, when you're famous you don't even have to ask they let you do it."

Kimmel said it was something like "their version of a ribbon-cutting ceremony over there," but he noted that Trump somehow seemed different after touching it. He then showed footage of Trump's eyes and mouth glowing.

Ironically, not long after, a sinkhole formed outside of the entrance of Mar-a-Lago. Kimmel showed the orb coming out of it.