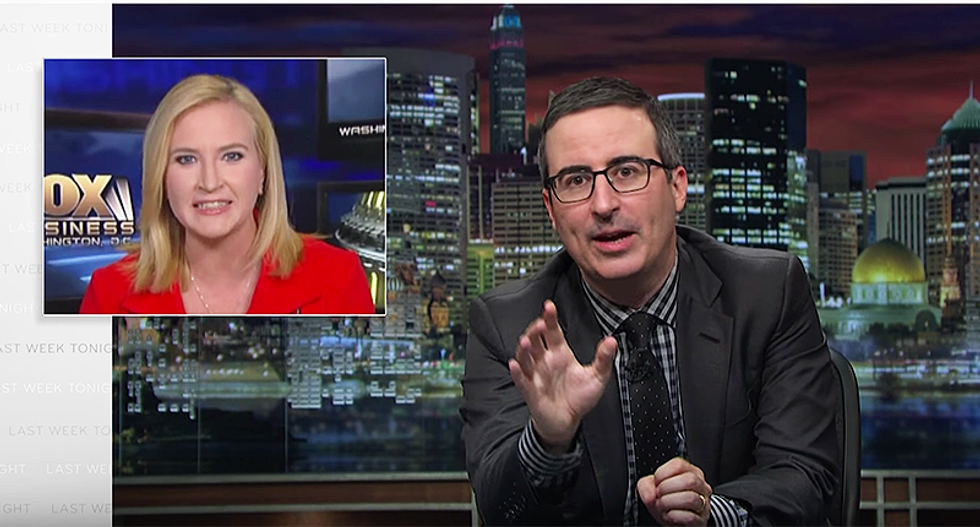 John Oliver wasn't about to let it go when Fox Business News hosts attacked his net neutrality campaign. In previous episodes, Oliver has worked to explain the complicated topic and began a campaign to encourage people to express a plethora of public comments about the opposition to the Federal Election Commission removing independence from internet service providers.

In a web exclusive, Oliver explained that over 1.6 million comments have been made on both sides of the issue, but Fox took issue with the fact that some were from people saying that their names were "Donald Trump" or "John Oliver." Other comments were insulting or racist, and Oliver told those commenters to “cut it out.”

Elizabeth Harrington from the Washington Free Beacon gathered that the campaign was worth discounting entirely due to a few of the comments she didn't deem serious. A shocking assessment of a campaign titled GoFCCYourself. However, Oliver's more important message was for people to hold off on commenting since the FCC is voting on May 18 and won't consider any comments the week prior to a vote. He promised they would redirect his website GoFCCYourself.com back to the public comments section after that week.

Oliver also demanded that internet bots wake up to the fact that they're in trouble without net neutrality. According to the FCC there have been over 128,000 anti-net neutrality comments that are nearly identical and posted by spam bots.

"You would assume the bots would be in favor of a free and open internet," Oliver noted.

But one comment truly took Oliver back to what the issue is really about.

His explanation for why this comment isn't real isn't suitable for work but you can watch it in the video below:

It's been one year since former President Donald Trump suggested that scientists investigate the possibility of injecting people with disinfectants to cure the novel coronavirus, and one former Trump official tells Politico that they saw that particular public relations trainwreck coming from a mile away.

The former official, who insisted on anonymity in order to be candid, said they were weary of letting Trump talk at the daily coronavirus briefing on April 23rd, 2020 because he had just been briefed on how quickly disinfectant could kill the virus.