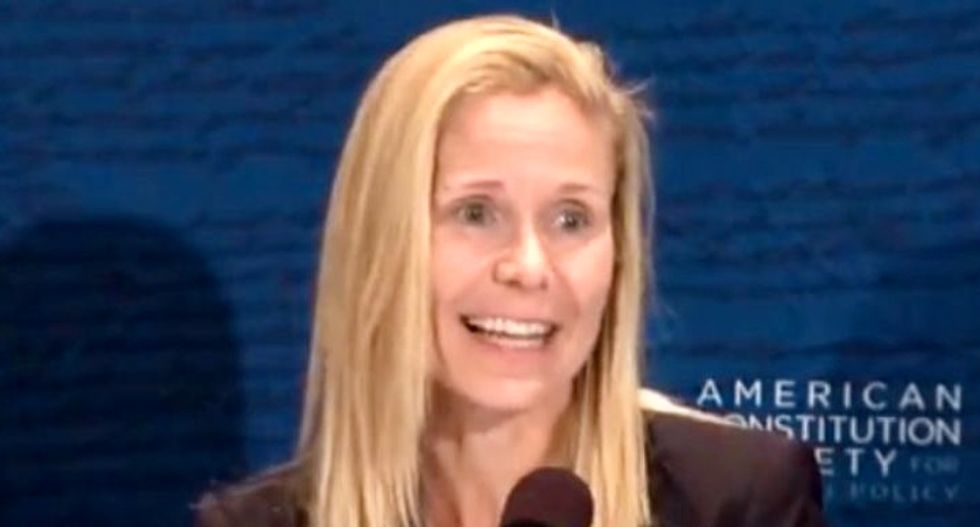 U.S. appeals court judges voiced skepticism on Monday toward a claim by President Donald Trump's administration that his temporary ban on travelers from six Muslim-majority nations was inspired by national security concerns, not religious bias.

The arguments before the court came in the administration's appeal of a March 15 ruling by Maryland-based federal judge Theodore Chuang that put the travel ban on hold just a day before it was due to go into effect.

"This is not a Muslim ban," Wall told the judges.

Judge Robert King told Wall that the Republican president has never retracted previous comments about wanting to impose a ban on Muslims. "He's never repudiated what he said about the Muslim ban. It's still on his website," King asked, referring to a Trump campaign promise for a "total and complete shutdown of Muslims entering the United States."

The arguments marked the latest legal test for Trump's temporary travel ban, which also was blocked by federal judge Derrick Watson in Hawaii in a separate legal challenge. An earlier version of the ban was also blocked by the courts.

The administration argued that the text of the order did not single out any particular religion and the president's move was needed to protect the United States against terrorism.

But Judge Pamela Harris said Trump's action clearly had a disparate impact on Muslims, asking, "How is this neutral in its operation as to Muslims?"

Wall said the temporary ban was intended to give the government time to evaluate whether people from the six countries were being subjected to adequate vetting to ensure they did not pose a security threat to the United States.

The 4th Circuit judges asked Wall what had been done by the administration since Trump signed the two orders to improve vetting procedures, given that the 90 days the administration said it needed for a review after the order was first signed in January had passed.

Wall told the court "we have put our pens down," because of the rulings from the courts that blocked the orders. He said that while some work has been done more generally, "since March 16, we have done nothing to review the vetting procedures for these countries," Wall said. He said the aim of the 90-day window was to free up the government to do the review, but instead manpower has been devoted to litigating the cases brought against the ban.

Chuang's ruling came in a lawsuit challenging the revised travel ban brought by refugee organizations and individuals who said they would be harmed by the policy.

The challengers said Trump's order violated federal immigration law and a section of the U.S. Constitution's First Amendment barring the government from favoring or disfavoring a particular religion.

The groups, represented by the Americans Civil Liberties Union, must prove specific people were harmed by the order, known as legal standing, leading to a tough line of questioning for the plaintiffs from Republican appointee Judge G. Steven Agee.

ACLU lawyer Omar Jadwat said all the plaintiffs had standing because the suspension of entry of people from these Muslim-majority countries "is embodying the message of condemnation to their religion," which would violate the Constitution.

Trump issued the March executive order after federal courts blocked an earlier version, issued on Jan. 27 a week after he took office, that also had included Iraq among the nations targeted. That order, which went into effect immediately, triggered chaos and protests at airports and in several cities before being put on hold due to legal challenges.

The second order was intended to overcome the legal problems posed by the original ban.

Wall argued that the second order was changed significantly from the first to address some of the legal problems.

Judge James Wynn Jr. questioned if Trump's comments could be looked at to determine the ban's intent.

"Which are the statements are relevant here?" Wynn asked in reference to some of Trump's comments. He seemed to refer to Trump's remarks after the issuance of the second ban order that it was just a "watered down" version of the first.

"There was sort of a wink and a nod, of 'Well you know what I mean,' even though it's changed," Wynn said.

Regardless of how the 13 judges of the 4th Circuit rule, the matter is likely to be decided ultimately by the U.S. Supreme Court.

No ruling was expected on Monday and it was unclear when the court would rule.

The administration's appeal in the Hawaii case will be heard in Seattle on May 15 by a three-judge panel of the San Francisco-based 9th U.S. Circuit Court of Appeals. The three judges assigned all are Democratic appointees.

(Reporting by Lawrence Hurley; Additional reporting by Mica Rosenberg in New York and Dan Levine in San Francisco; Editing by Will Dunham)