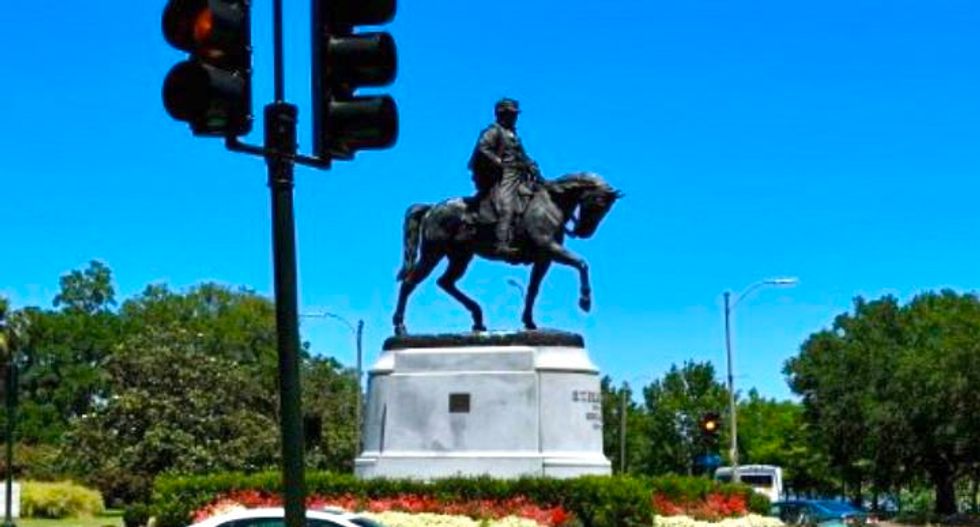 FILE PHOTO: P.G.T. Beauregard statue, located in front of the New Orleans Museum of Art, is one of three remaining confederate statues to be removed in New Orleans Louisiana, U.S., April 24, 2017. REUTERS/Ben Depp

A New Orleans preservationist on Monday sued to stop the city from removing a statue of a Confederate general that critics say glorifies the era of slavery in the U.S. South.

The lawsuit, filed by Richard Marksbury in Orleans Parish Civil District Court, says the city cannot legally take down the statue of Confederate States Army General P.G.T. Beauregard because it does not own the memorial or the land it's on.

"If that monument is removed, then they (the city) would open themselves up to some legal action," said Marksbury, who is a member of the Monumental Task Committee, a volunteer group that works to preserve monuments in New Orleans.

Marksbury's lawsuit is the latest legal challenge to the city's decision in 2015 to remove Beauregard's statue and three other monuments honoring leaders of the Confederacy during the U.S. Civil War.

In March, a U.S. appeals court ruled that New Orleans had a right to proceed.

The first of the four monuments was removed last month, with the aim of relocating it elsewhere. At that time, Mayor Mitch Landrieu said the removals would send a message of "diversity, inclusion and tolerance."

On Sunday, supporters of the monuments, some waving Confederate flags, clashed with demonstrators near the site of a statue honoring Confederate General Robert E. Lee that is also slated for removal.

In recent years, a string of southern states have moved Confederate-era monuments to museums, an effort that intensified after the June 17, 2015 massacre of nine blacks in a Charleston, South Carolina, church at the hands of a white supremacist.