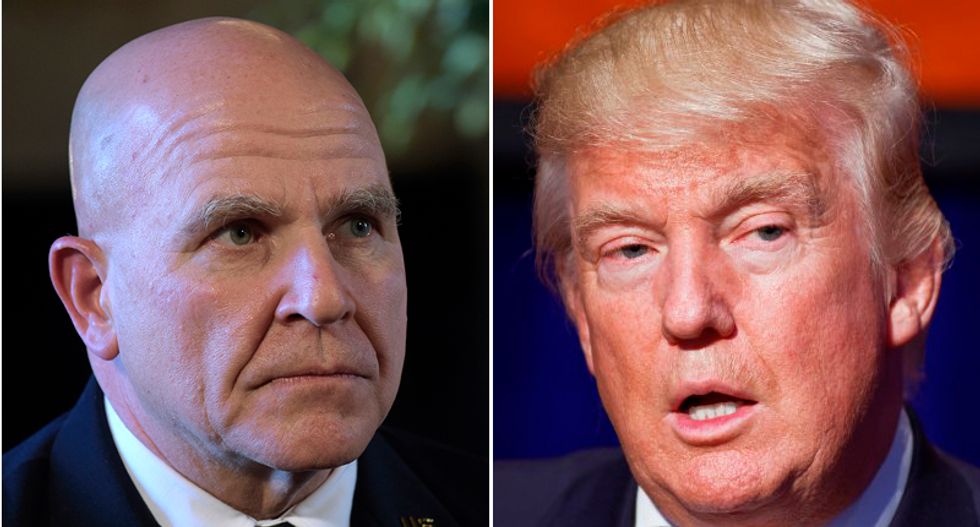 Writing at Politico, military affairs specialist and journalist Thomas Ricks urged President Donald Trump's National Security Advisor, H.R. McMaster, to walk away from his job because he does damage to his reputation every time he covers for the scandal-plagued White House.

Ricks begins by admitting that he initially hoped to see "mature, thoughtful people" join the administration for the good of the country, but after watching McMaster debase himself over the past week, defending Trump handing over classified intel to the Russians, he has had a change of heart.

"On the president’s first foreign trip, McMaster has continued to defend Trump, for example, expressing over the weekend a lack of concern about reports that Trump’s son-in-law and confidant Jared Kushner sought to establish a secret, back-channel line of communication to the Russian government that would be hidden from the U.S. national security apparatus," Ricks wrote. "'We have backchannel communications with a number of countries,' McMaster said during a press availability in Italy. 'What that allows you to do is communicate in a discreet manner, so I’m not concerned.'”

"Really?" Ricks asks. "There’s no way that would be kosher. And so I fear that McMaster has confused protecting the president with protecting the country."

"It saddens me to watch him do this," Ricks continued. "I’ve known McMaster since he was a major. He is an unusual officer. He has led troops in combat in two very different wars. He is one of our most thoughtful generals. And he wrote one of the best books about the Vietnam War, 'Dereliction of Duty,' about the failures of senior American leaders during that war."

"McMaster probably thinks that by staying at his post, rather than resigning in disgust, he is doing his duty. Specifically, he may think that if stepped down, he might well be succeeded by an alt-right ally of White House adviser Steve Bannon. As I said, I used to believe that too," Ricks wrote. "I think that McMaster should step down—not just for his own good, but for the good of the country. What if he is replaced by a right-wing extremist who operates on an alternative set of 'facts'? So much the better, I say."

Ricks then laid out his rationale -- McMaster's presence provides Trump with credibility.

"The saving grace of Donald Trump as president is his incompetence. He knows almost nothing of how the federal government works. He seems to have been repeatedly surprised by the checks and balances written into the Constitution by the Founding Fathers. And he seems uninterested in learning," Ricks wrote. "Effectively, we have no president. Rather, we have someone who plays the president on television and on Twitter."

"Trump seems to have almost no effect on the workings of the federal government," he continued. "An ideologue likely would be as ineffective as national security adviser as Trump has been as president, and that wouldn’t be a bad thing."

"The less control Trump has over the federal government, the better. Think of it this way: Which would be more dangerous, a Mafia family overseen by the cruel and competent Michael Corleone, or one led by his ineffectual brother Fredo? So, I say, Let Donald be Donald," he concluded.

You can read the whole scathing opinion piece here.