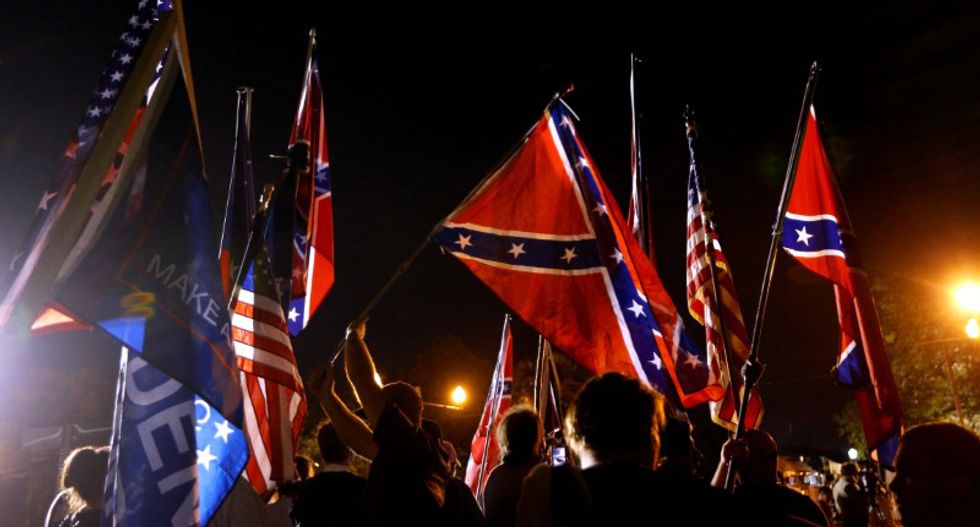 Protesters gather before a monument of Jefferson Davis is removed in New Orleans, Louisiana, May 11, 2017. REUTERS/Jonathan Bachman

Crews laboring under the glare of floodlights began what appeared to be the work of sawing the bottom of the 14-foot-tall statue - a bronze likeness of Beauregard on horseback - from its pedestal while some 200 bystanders looked on near the entrance of City Park.

A crane that was expected to eventually lift the statue from its base was moved into position, along with other heavy equipment, after workers cleared the area around the monument.

The crowd of onlookers, about evenly divided between statue supporters and opponents, were mostly subdued, though a few individuals shouted at one another across the police barricade separating them. Some members of the pro-statue group waved Confederate flags.

The public memorials to Beauregard and other heroes of the U.S. Civil War's pro-slavery Confederacy have been denounced by critics as an affront to the ideals of multi-racial tolerance and diversity in the majority-black Louisiana city.

But doing away with the monuments has met with staunch resistance from groups who argue that the statues are nevertheless important symbols of the city's Southern heritage.

The City Council voted in 2015 to remove monuments honoring two of the Confederacy's best-known generals - Beauregard and Robert E. Lee - as well as Confederate President Jefferson Davis and a 19th-century white supremacist militia.

The Crescent City White League monument was taken down on April 24 and the Davis statue on May 11. The Lee memorial is scheduled to go next, though officials have not publicized precise removal dates in advance.

Mayor Mitch Landrieu wrote an editorial published on Monday in The Washington Post defending his decision to support bringing down the statues, which he characterized as one of his proudest moments in public office.

"Removing New Orleans's Confederate monuments from places of prominence is an acknowledgment that it is time to take stock of, and then move past, a painful part of our history," Landrieu wrote.

The Louisiana House of Representatives passed a measure on Monday that would require local governments to hold referendums before removing any Confederate monuments.

But the bill would not keep New Orleans from proceeding with its plans, said Richard Marksbury, a Tulane University professor and member of the Monumental Task Committee that fought to keep the Confederate monuments in place.