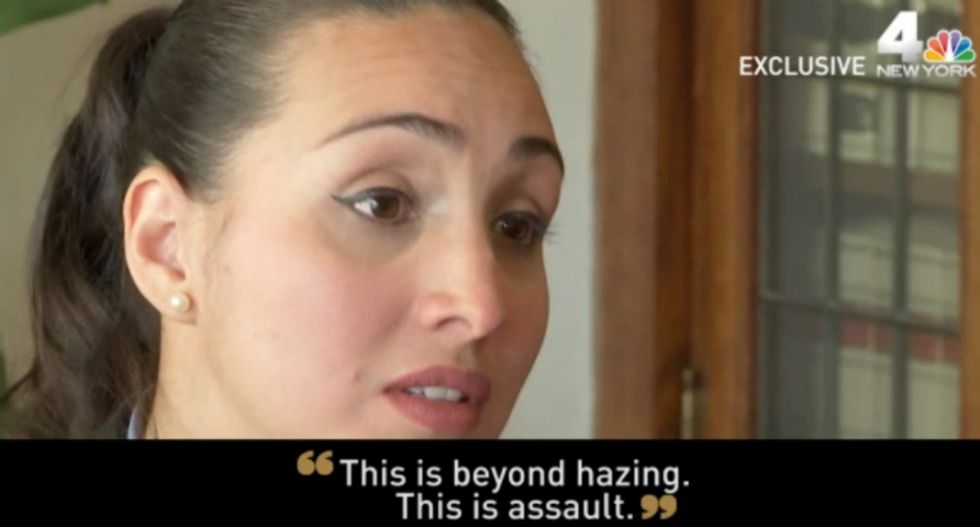 Screengrab of NBC 4 New York's promo of tonight's bombshell report on the Department of Homeland Security investigation of U.S. Customs and Border Protection Agency officers at the Newark Airport

According to a bombshell report from NBC4 New York, the Department of Homeland Security is investigating U.S. Customs and Border Protection Agency officers at the Newark Airport for assaulting victims -- their own colleagues -- in a secure room in Terminal C, using what they call a "rape table."

The investigation is being lead by Department of Homeland Security Inspector General John Roth, who was a federal prosecutor for two decades, rising in the Justice Department to Acting Deputy Assistant Attorney General in the Criminal Division and chief of staff to the Deputy Attorney General.

“Once the lights go out, they grab you up like a gang, and they forcibly throw you on the table and one officer ended up mounting me and pretty much riding me like a horse,” one officer told NBC 4. “I don’t know how much more criminal you can get.”

"I’m afraid for my life, my safety," CBP officer Diana Cifuentes told NBC 4. "This is terrorizing. How is it that officers believe they’re free to do whatever they want to do?"

"There was a back and forth between another officer and myself," Cifuentes recalled. "He said, 'You deserve to be put on the rape table.' And that’s when he started chasing me. … [Eventually] I was held down by another officer and one additional officer taped me with green customs tape to the chair."

All three officers claimed there was too much intimidation for them to initially file official complaints.

U.S. Customs and Border Protection has pledged to, "cooperate fully with all criminal or administrative investigations of alleged misconduct."

The most bizarre allegation came from CBP officer Dan Arencibia. He said he was haunted by the playing of the 'Party Boy song' from the MTV series "Jackass" that played in the "rape table" room.

"They’re monsters in a sense," Arencibia said. "They know that we can’t do anything about this."

One of the other officers disagreed with his assessment.

"For this to stop we have to go to the public," argued CBP Officer Cifuentes. "We have to let people know that this is going on."

Watch the full story below:

Failed Arizona gubernatorial candidate Kari Lake believes that former President Donald Trump was right to call for the "termination" of the sections of the Constitution that prevent him from being reinstated as president.

In an appearance on the right-wing Salem News flagged by the Republican Accountability Project, Lake argued that Trump's desire to shred America's founding document was justified given the fraud that supposedly deprived him of a second term in the White House.