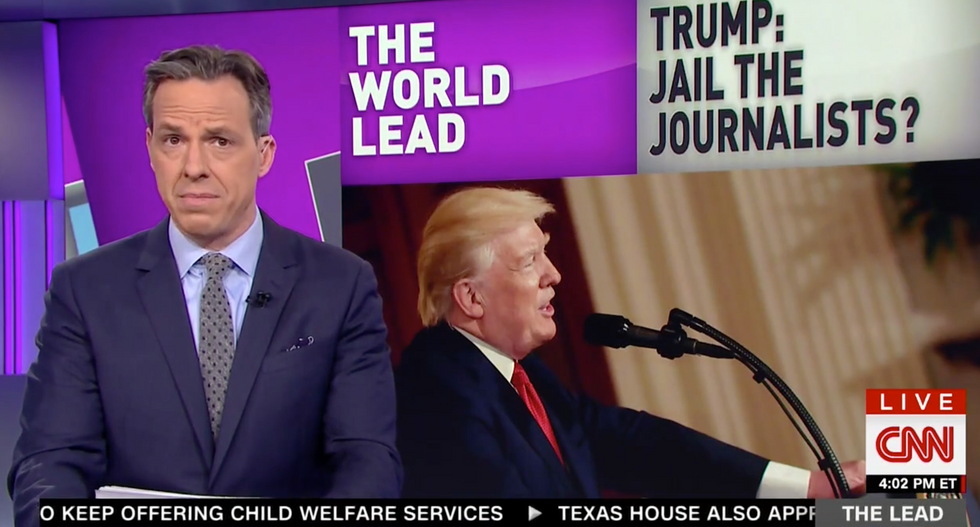 CNN’s Jake Tapper on Monday blistered Donald Trump’s trip to Saudi Arabia, arguing his administration is “not exactly leading by example” on American values including freedom of the press and freedom of assembly.

“The White House shutting out the U.S. media in Saudi Arabia and marveling at a lack of protestors. When in Riyadh, I suppose,” Tapper began on CNN’s “The Lead.”

Tapper pointed to Trump’s speech where he promised not to “lecture other countries on how to live.”

“Many took as an abdication of the traditional role of the United States, and publicly preaching the values of freedom and democracy,” Tapper said. “Values that some critics suggest the Trump Administration might not fully appreciate.”

Citing a source close to James Comey, Tapper said Trump expressed “irritation” over leaks about private phone conversations with leaders. According to a memo written by Comey, Trump instructed the former FBI director to “throw journalists in jail.”

Tapper then turned to Secretary of State Rex Tillerson’s decision to hold a press conference in Saudi Arabia without informing the U.S. press.

“A man who, as America’s top representative to the world, is supposed to publicly demonstrate the importance of free speech and free press,” Tapper said, arguing Tillerson is “not exactly leading by example on the virtues of freedom of the press.”

But it was Trump’s Secretary of Commerce Wilbur Ross who “truly stunned observers” when he praised the lack of protests in Saudi Arabia during Trump’s visit. Ross made those comments in an interview with CNBC’s Becky Quick who was quick to point out Saudis “don’t have the same rights of free speech or free assembly that we have in the U.S.” Ross called Quick’s assertion a “theory.”

“It’s not theory,” Tapper explained. “In the wake of Arab Spring in 2011, Saudi Ministry of the Interior informed the Saudi people, ‘regulations in the kingdom forbid, categorically, all sorts of demonstrations, marches and sit-ins.”

“Dissent in Saudi Arabia has been criminalized,” Tapper added. He then blasted Ross for extolling the Saudis after they gave him “two gigantic bushels of dates.”

“Two gigantic bushels of dates?” Tapper asked. “That’s all it took for the Saudis to cover up an abysmal human rights record, funding for extremism all over the globe, evidence of possible government participation in 9/11 and current alleged war crimes against civilians in Yemen?”

“A critic might say you guys are cheap dates,” Tapper said. “Pardon the pun.”