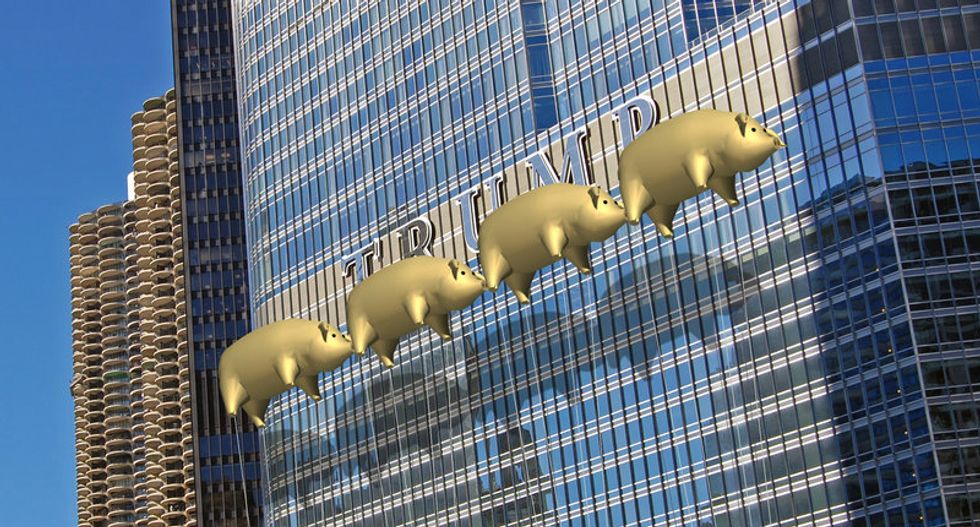 An artist's rendering of Flying Pigs on Parade from the project's website.

This summer, four 30-feet by 15-feet flying pigs will block the sign for Trump Tower in Chicago.

"It's nearly impossible to miss the logo on any of Donald Trump's reliably gaudy buildings, but soon Chicago will be spared from the sight of the president's bold-faced name thanks to one cunningly creative architect," reports Architectural Digest. "Jeffrey Roberts, of New World Design, has a spectacularly on-the-nose idea for rejecting the sight of Chicago's Trump Tower. Called 'Flying Pigs on Parade,' the scheme will obscure the mogul's logo with art installation comprising flying, gold-colored pigs."

Roger Waters himself signed off on the project using his image rights.

"While open to a variety of interpretations, the installation’s design is specifically inspired by the artwork of Pink Floyd’s classic 1977 album Animals," explains Consequence of Sound. "The artwork, conceived by Roger Waters and designed by Storm Thorgerson and Aubrey Powell of Hipgnosis, was partly inspired by George Orwell’s political fable Animal Farm and features a balloon pig flying between the chimneys of Battersea Power Station in London."

"The references are many, from flying pigs and Miss Piggy comments to a taste for gold embellished interiors," the website continues. "Ultimately, this is a very rational design and is in direct contrast to the chaotic nature and bizarre antics of our current leadership."

After their Chicago debut, it is planned for the flying pigs to travel to Trump properties in other cities.