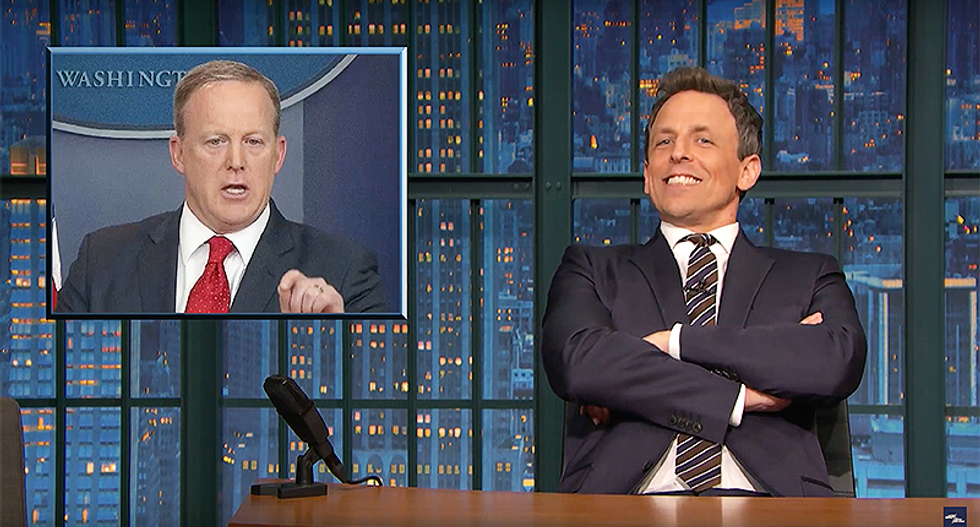 During press secretary Sean Spicer's daily press briefing where reporters berated him for promoting Trump's border wall that has now being replaced by a fence that was actually paid for by budgets under previous presidents.

His second example was an exchange in the "Face the Nation" interview with Trump in which host John Dickerson quoted George W. Bush. According to Bush, the reason that the Oval Office is round is because there is no corner for the president to hide.

"Obviously, it's a metaphor about taking responsibility for your actions, yet Trump seemed to take it literally," Meyers said before playing the clip.

Trump told Dickerson the quote is accurate because there are "certainly no corners," that the room was "open" and there was "nobody out there." Somehow managing not to laugh, Dickerson politely explained to Trump what Bush meant as Trump repeated, "sure, sure, sure" like he knew that.

"Trump's like a guy who didn't get a joke. 'Take my wife! Please!'" Meyers said making an old joke. "Ok, where is she?" he said doing a Trump impression. "Also, I want to point out that the metaphor he didn't get was from George W. Bush. That's where we're at. The one thing George W. Bush never thought he'd do is go over someone's head.

Watch the clip of Meyers below: