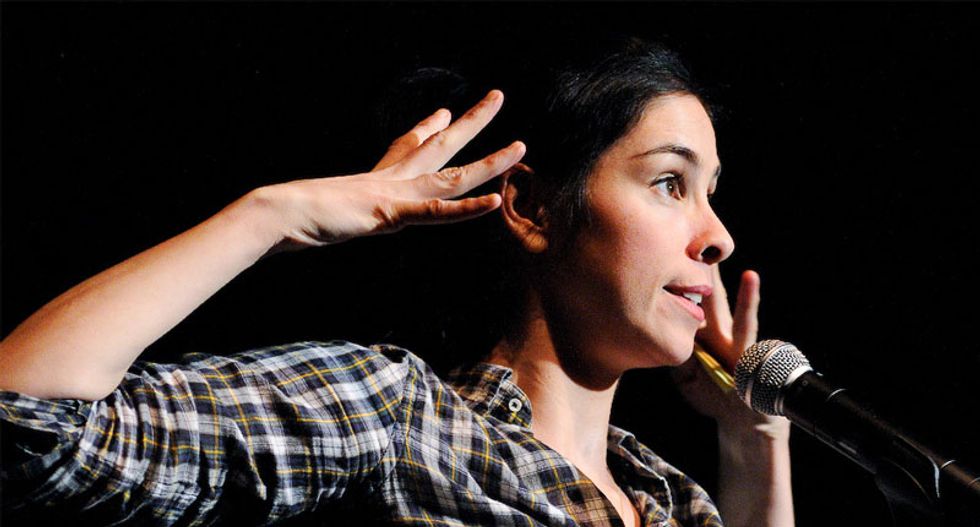 Comedian Sarah Silverman is in love with the "Handmaid's Tale" and she has a lot of admiration for Megan Phelps-Roper, the granddaughter of hatemonger Fred Phelps, the founder of Westboro Baptist Church.

Phelps maintained that the attacks on 9/11 happened because the United States allows LGBT people to live within its borders. Phelps-Roper changed her understanding in 2015 and left the church.

“She’s held signs that says ‘God Hates Fags,’” Silverman told The Daily Beast. “She cheered at 9/11. Through social media her mind was completely opened and changed. She left. She escaped. And she’s amazing.”

Silverman is working to promote her new Netflix comedy special Speck of Dust.

“There are a lot of brilliant shows out there that are my favorite shows, but they connect with like-minded people,” she explained. “My hope is to connect with un-likeminded people and expose to them, and to us, that we’re the same.”

Silverman has been an outspoken advocate for women and against the anti-choice movement through her stand-up and advocacy work with Lady Parts Justice.

“It’s very affected by these times, but it’s not a bunch of Trump jokes,” she clarified.

“First of all, it’s like, the best thing I’ve ever seen,” she described. “But it’s such a horror movie. It’s just terrifying that the flashbacks in the show is what we’re going through right now.”

She admitted she typically is the person who screams in the faces of protesters about her rights and that those who are wrong are "probably also an assh*ole." However, she's developed a metaphor to help antis understand.

“When our defenses are up, our porcupine needles are up,” she says. “We’re not open. We’re in survival mode. I think that when you’re one-on-one with that first hug or hello with someone who may not like you—the first gesture of love, to be very hippy-dippy—if you can get their porcupine needles down and yours too, you realize you’re not so different.”

Silverman also discussed her near-death experience after a "freak case of epiglottitis," which happens when a windpipe lesion stops or slows airflow into the lungs. Silverman woke up in the hospital after being heavily sedated and tied down to keep her from pulling out a breathing tube. She kept asking friends "was I in an accident?"

“It's crazy that I didn’t die,” she confessed. She spoke openly on Facebook about losing her friends Harris Wittels, Garry Shandling as well as her mother, shortly before her illness.

“I think also because I lost three really close people to me and almost died myself in the span of two years, what I learned more than anything is we’re ticking time bombs,” she explained. “It’s not, ‘Look at the sunset! Can you believe it? Let’s enjoy every moment!’ Maybe there’s a part of me that has that. I think I’m maybe more grateful or happier or not sweating the small stuff as much.”

While receiving anesthesia, her close friend and manager Amy recorded Silverman complaining about not being high enough. The video shows at the end of her Netflix show.

“I want to see other people!” She's seen telling her partner Michael Sheen as her bed circles the corner. “Play this in slow motion on my death reel!”

That might be typical Silverman humor but another video her sister took of the fearless progressive shows her in recovery with a breathing tube trying to communicate.

“That was the most jarring,” Silverman said. “You wouldn’t believe I’m alive today, watching it.”

She doesn't remember any of it.

“I cried when I saw it,” she confessed. “It took them about 12 minutes to realize that I was asking if Michael was scared.”

Her special "Speck of Dust" is available now on Netflix.