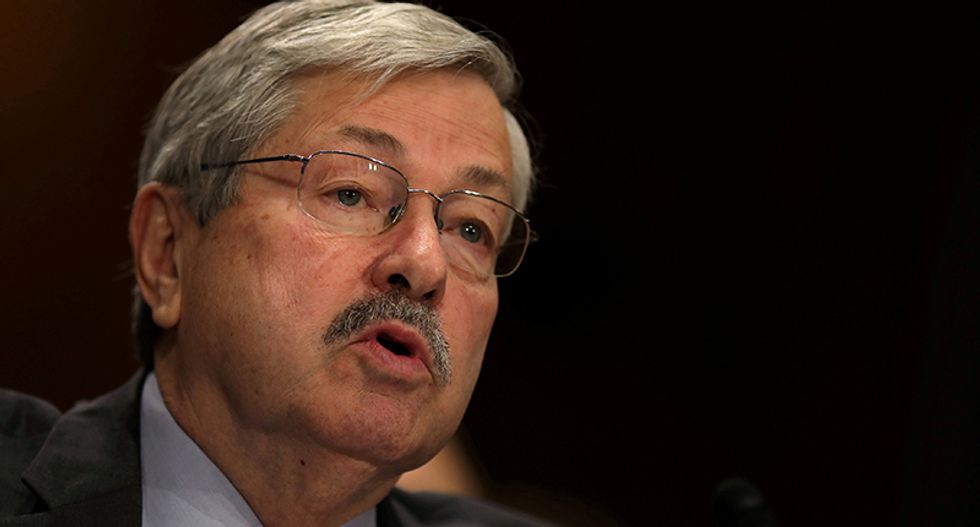 FILE PHOTO - Iowa Governor Terry Branstad testifies before a Senate Foreign Relations Committee confirmation hearing on his nomination to be U.S. ambassador to China at Capitol Hill in Washington D.C., U.S. on May 2, 2017. REUTERS/Carlos Barria/File Photo

The U.S. Senate voted overwhelmingly on Monday to confirm Iowa Governor Terry Branstad, one of the U.S. politicians most closely acquainted with China, as President Donald Trump's ambassador to Beijing.

One of Branstad's first challenges will be pushing China to take a harder line against North Korea, which said Monday it successfully tested what it called an intermediate-range ballistic missile, although U.S. officials and experts questioned the extent of the country's progress.

Branstad assured lawmakers during his confirmation hearing he would take a firm line with the Chinese government on issues from North Korea to trade disputes and human rights, despite years working closely with Chinese officials.

Branstad said his long ties would help him push Beijing on difficult topics, including North Korea and thorny trade issues.

Chinese President Xi Jinping has called Branstad, 70, an "old friend" after decades of dealings on agricultural trade during his long career in politics in Iowa, an important farming state.

The vote was 82-13, with all 13 of the votes against the Republican president's nominee coming from Democrats.

Speaking in Beijing, Chinese Foreign Ministry spokeswoman Hua Chunying said Branstad had worked hard to push relations between Chinese and U.S. regions and China hoped he could play an even more positive role in increasing understanding and promoting relations once he takes office.

The United States has been trying to persuade China to agree to new sanctions on North Korea, which has conducted dozens of missile firings and tested two nuclear bombs since the beginning of 2016.

Trump has warned that a "major, major conflict" with North Korea is possible over its weapons programs, although U.S. officials say tougher sanctions, not military force, are the preferred option.

He is due to be replaced in Des Moines by Lieutenant Governor Kim Reynolds, who would be the state's first woman governor.