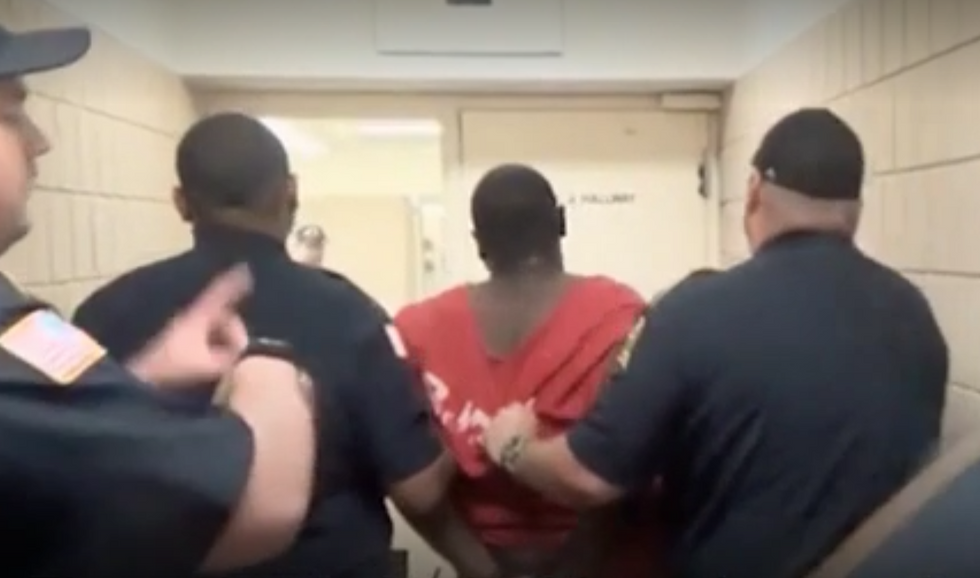 Guards at a private prison take Arkansas man Michael Sabbie to his cell, where he would die hours later (Screen cap).

A shocking new video shows guards at a for-profit Arkansas prison roughed up a prisoner who tried to warn them about his assorted medical conditions -- and then left him to die in his cell despite his repeated pleas for their help.

The prisoner in question, an Arkansas father of four named Michael Sabbie, was first taken into custody in July 2015 on a misdemeanor assault charge. According to the New York Times, Sabbie warned officials at the jail that he suffered from heart disease, high blood pressure and asthma -- but guards nonetheless accused him of faking illnesses when he regularly collapsed in his cell because he had difficulty breathing.

The video obtained by the Times begins with Sabbie standing in the hallway in the prison, leaning against the wall trying to catch his breath. A guard then comes and confronts Sabbie, who then tries to walk away down the hall.

At this point, several guards tackle him and bring him to the nurse's station for treatment.

"The video shows Mr. Sabbie breathing heavily over the next nine minutes as corrections officers drag him to the nurse’s station and then into a shower," the Times notes. "After he collapses in the shower, guards pick him up and pull him into his cell as his orange pants fall below his waist. Mr. Sabbie can be seen rolling on the floor and wiping his face with his shirt before the recording stops."

Sabbie regularly shouted out "I can't breathe" as the guards took him back to his cell. He was found dead in his cell the next morning.

Sabbie's family filed a wrongful death lawsuit against the for-profit prison where Sabbie was being held, as it accused at least a dozen employees at the jail of being responsible for his death.

Watch the video of Sabbie below.