Some Chase branches in Seattle closed by protests over pipeline loans 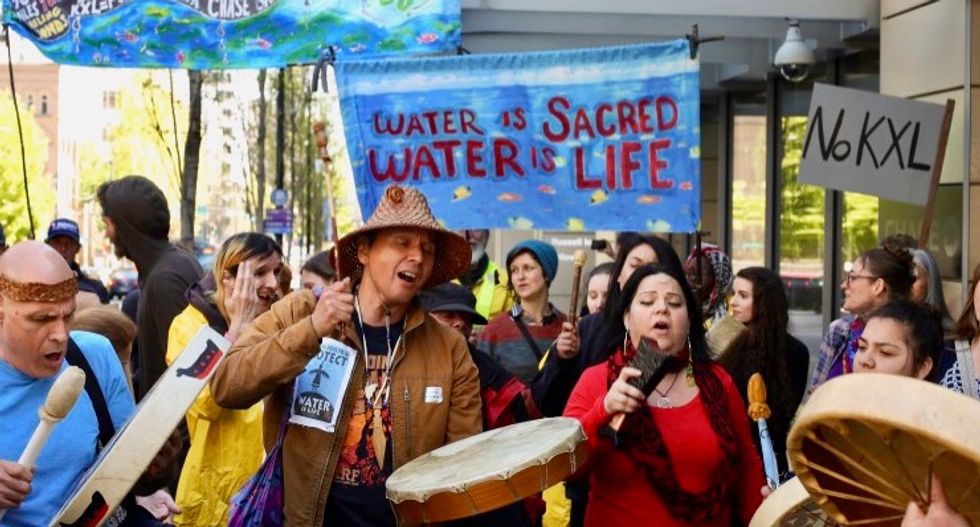 Native American leaders and climate activists join together in song outside of a Chase Bank location, to oppose the Keystone XL pipeline, in Seattle, Washington, U.S. May 8, 2017. REUTERS/David Ryder

Native American leaders and climate activists protested at several Chase branches in Seattle on Monday, forcing them to close temporarily as demonstrators demanded the bank not lend to projects like the Keystone XL oil pipeline.

Police said 26 people were arrested by late afternoon. Activists said they disrupted operations at 11 Chase branches, and two other branches closed as well.

Darcy Donahoe-Wilmot, a spokeswoman for Chase, which is a unit of JP Morgan Chase & Co, declined to comment.

At a branch in downtown Seattle, about 50 protesters occupied the main lobby, where they made speeches, sang songs, held signs and banners and even ordered a tall stack of pizzas before police blocked the doors.

At another Seattle branch, a handful of protesters went inside while two others locked themselves by their necks to the front doors with bicycle locks.

"I have a personal responsibility to make sure we have a livable climate," said a protester who locked herself to the door and would only identify herself as 21-year-old Andrea from Olympia, Washington.

Organizers of the protests aimed to dissuade Chase from lending to the companies behind two major oil infrastructure projects, the Keystone XL pipeline and Trans Mountain Pipeline expansion, and tar sands oil production in general. Protesters said they were fighting global warming.

These efforts echo similar efforts with other banks as activists have shifted to targeting the financial backers of the pipelines rather than sites like the Dakota Access Pipeline in North Dakota, where thousands protested last year.

Bank are more sensitive to bad publicity than the pipeline companies, said Seattle city council member Mike O'Brien, who participated in one of the protests on Monday.

"It's a relatively small percentage of their overall portfolio," protest organizer Ahmed Gaya said of the banks' stakes in various oil and gas pipelines. "If you can make that very small part ... have a vastly disproportionate effect on their public image, that's very persuasive."

In April, Citigroup executives conceded they had approved investments in the Dakota pipeline too quickly after a noisy protest at its annual shareholder meeting, while Greenpeace activists protested Credit Suisse's dealings with companies behind the same pipeline. The previous month, Dutch bank ING Groep agreed to sell its $120 million share of a loan for the Dakota pipeline.