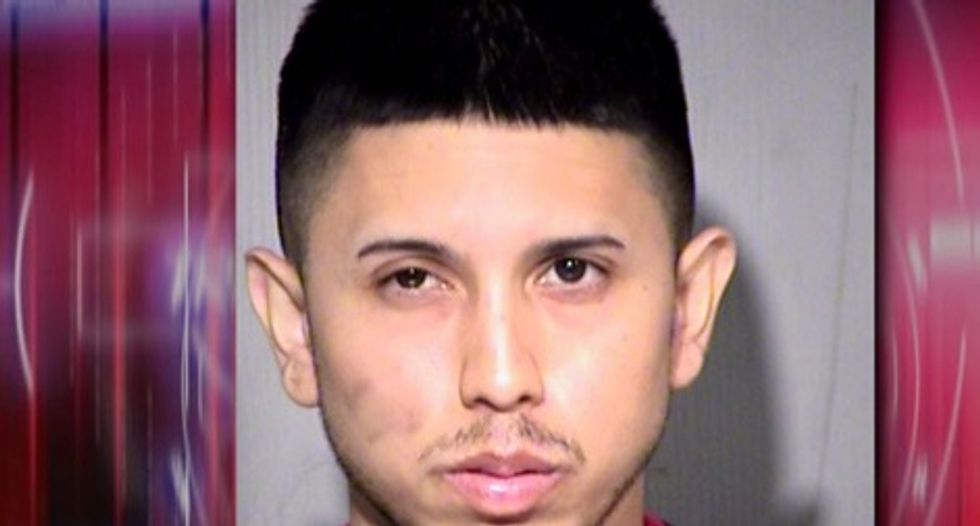 A Phoenix man accused in a string of nine murders attributed to the so-called Serial Street Shooter professed his innocence during an initial court appearance, a court video released on Tuesday showed.

"I’m innocent," Aaron Saucedo, 23, blurted out as a Maricopa County prosecutor was detailing the case against him during the hearing on Monday evening.

Police believe he committed eight other murders between August 2015 and July 2016 but he has not been charged in those shootings.

After trying to find the suspect for more than a year, police announced on Monday they had linked Saucedo to a total of 12 seemingly random shootings on the city’s west side.

He was arrested on April 19 for what police now believe was the first murder in the crime spree, the killing of 61-year-old Raul Romero. Romero was dating Saucedo’s mother at the time.

Few details have been released on how Saucedo was tied to the killings, although police have said evidence against him includes surveillance video, witness statements and ballistics material. Court records have been sealed.

Investigators believe that the crime spree began on Aug. 12 when shots were fired into a home. There were no injuries.

In the most deadly single attack, two women and a 12-year-old girl were shot to death in front of a home before dawn on June 12, 2016.

The latest incident occurred on July 11, when a gunman shot a vehicle occupied by a 21-year-old man and 4-year-old boy in a residential neighborhood. Both were uninjured.

Police credited the public with helping to solve the case, adding that 3,300 tips were made to a special crime hot line. Police said they expect to pay out the $75,000 reward posted for information leading to an arrest.

(Reporting by David Schwartz in Phoenix; Editing by Dan Whitcomb and Lisa Shumaker)