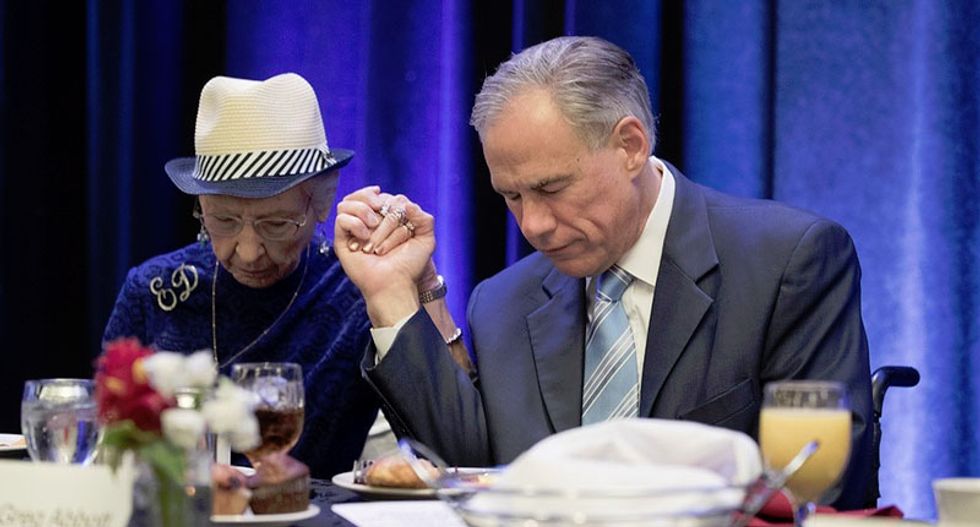 Gov. Greg Abbott prays with event organizer Evelyn Davison at the 66th annual Texas State Prayer Breakfast in Austin on May 1, 2017. Davison has organized the event for the last 43 years. (Bob Daemmrich for The Texas Tribune)

Gov. Greg Abbott confirmed Tuesday he has urged pastors to pressure the Texas House to advance the so-called "bathroom bills" that have languished there for weeks.

"I think as governor my job is to speak with my constituents," Abbott said in a radio interview. "These pastors were concerned about the possibility of no law passing that would protect the safety of women and children in bathrooms."

Abbott's comments come a day after one of the pastors, Robert Morris, told news outlets Abbott had reached out to him and nine other churches to build support for the legislation. Abbott said Tuesday that pastors had asked him to "weigh in and make sure that we got something passed."

"I said, 'If you really want to have something passed, you need to make sure that you make contact with the members of the House because this is where it's being held up,'" Abbott said in the interview with North Texas radio host Chris Salcedo. "It’s being held up in the House of Representatives."

It is not clear when Abbott and the pastors spoke, but on Monday, time ran out for the House to advance House Bill 2899, a bill that some hoped would serve as an alternative to the Senate's "bathroom bill." HB 2899, by Republican state Rep. Ron Simmons of Carrollton, would have gutted cities and school districts’ trans-inclusive bathroom policies.

The Senate’s “bathroom bill,” Senate Bill 6, passed the upper chamber almost two months ago and has not yet been referred to a House committee. It would require transgender people to use bathrooms in public schools, government buildings and public universities based on “biological sex."

Abbott himself has been less outspoken on the issue of regulating bathroom use this session than Lt. Gov. Dan Patrick, who made the issue one of his legislative priorities. After months of silence on the issue, Abbott put out a statement in April that called the Simmons bill "thoughtful" and said he would work with lawmakers to get a bill to his desk that he can sign.