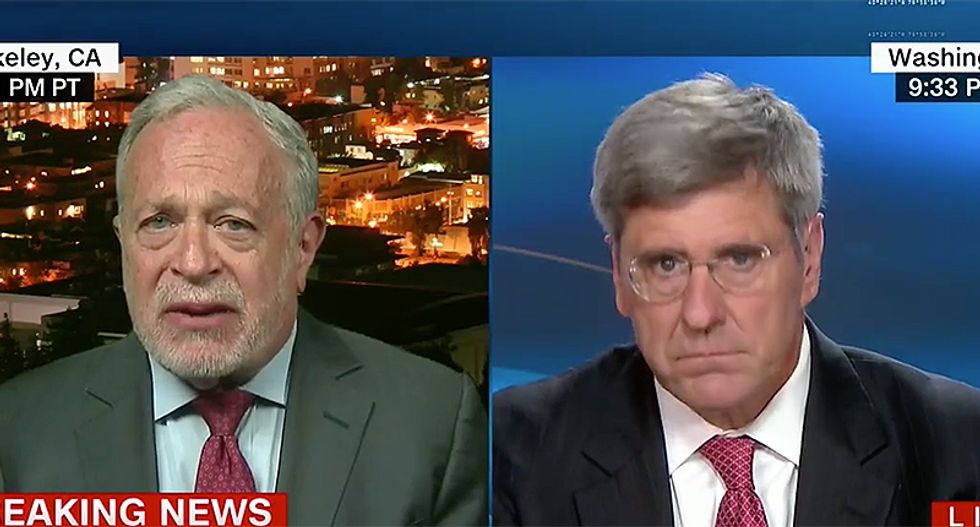 President Donald Trump's economic advisor Stephen Moore insisted that that Obamacare was hurting Americans all over the country as insurance companies pull out of the health care market. Class warrior Robert Reich called BS on Moore's claim saying that the previous Trumpcare law that was scored by the Congressional Budget Office would have removed health care for 24 million Americans.

"I believe with greater competition you could have -- cover everybody in this country," Moore claimed. "This is what the Republican bill aims to do at a much lower cost so it's affordable."

Moore went on to say that health care costs are so expensive that working families can't afford it. Reich attributed this to the stagnation in wages while insurance costs skyrocket.

"I don't believe, Anderson, that Obamacare on the current path, is not sustainable," Moore claimed. "You'll have tens of millions of people losing their health insurance under the current system because the costs are so high."

That's when Reich put his foot down.

"Steve, you said a moment ago that a lot of people are suffering a hardship under Obamacare, under the Affordable Care Act. I don't know what you're talking about. Twenty million people, or 24 million if you believe the Congressional Budget Office, would have lost their health insurance because of the former Republican health insurance. Those subsidies kept up with the increase in premiums. Health insurance costs are going up all over the country, even for people not on Obamacare," Reich said.

Reich concluded that Moore claiming the Affordable Care Act was "cruel" or "a burden to people" was flatly "absurd."