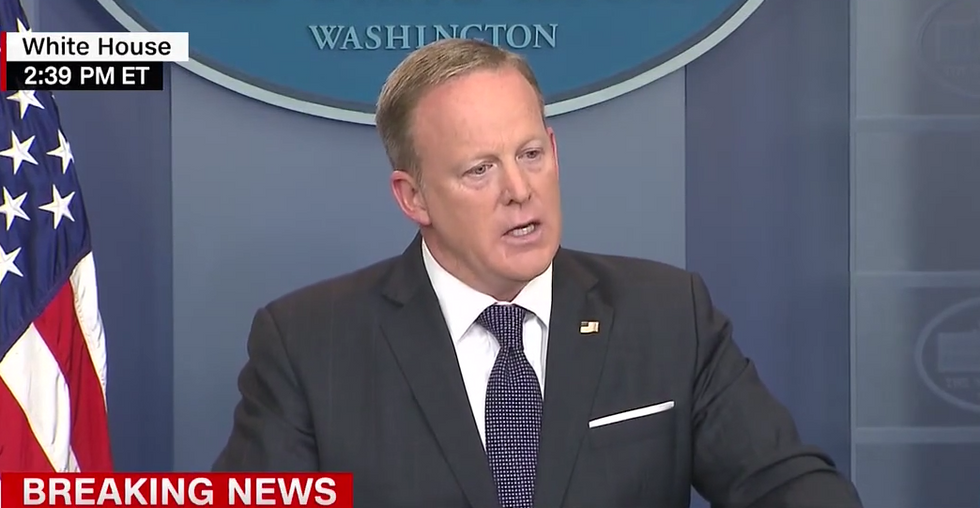 White House Press Secretary Sean Spicer got into a heated debate with reporters on Tuesday when they confronted him with President Donald Trump's accusations about them producing "fake news."

When asked by a reporter to list an example of "fake news," Spicer pointed to one tweet by a BBC reporter that incorrectly claimed that Trump was not wearing a translation earpiece while talking with foreign leaders over the weekend.

When the BBC reporter realized his mistake, he issued a public correction less than two hours later, although this wasn't enough to stop Spicer from chastising him regardless.

"On Friday, the president was having a great discussion at the G7 and someone from the BBC, and ultimately an incoming reporter for the New York Times retweeted that the president was being rude by disrespecting the Italian prime minister," Spicer complained. "When in fact, you all in all of the meetings watched the president with that one earpiece that's been used by all the other presidents... That's just fake!"

Reporters in the room pushed back, however, by noting that the one reporter's false tweet did not generate any stories at major newspapers and was quickly corrected.

"I was asked to give an example, and I did it," a testy Spicer shot back.

When another reporter again pointed out that one false tweet from a BBC reporter didn't drive news coverage for the president's trip, Spicer chided them for saying the tweet wasn't a big deal.

"Well, thank you, I appreciate it, you get to decide what is big and what is not," Spicer said sarcastically. "A lot of things have been pushed out based on unnamed unaccountable sources that is very troubling."