'The fish rots from the head': Morning Joe blames 'brutish' Trump for Gianforte's assault on reporter 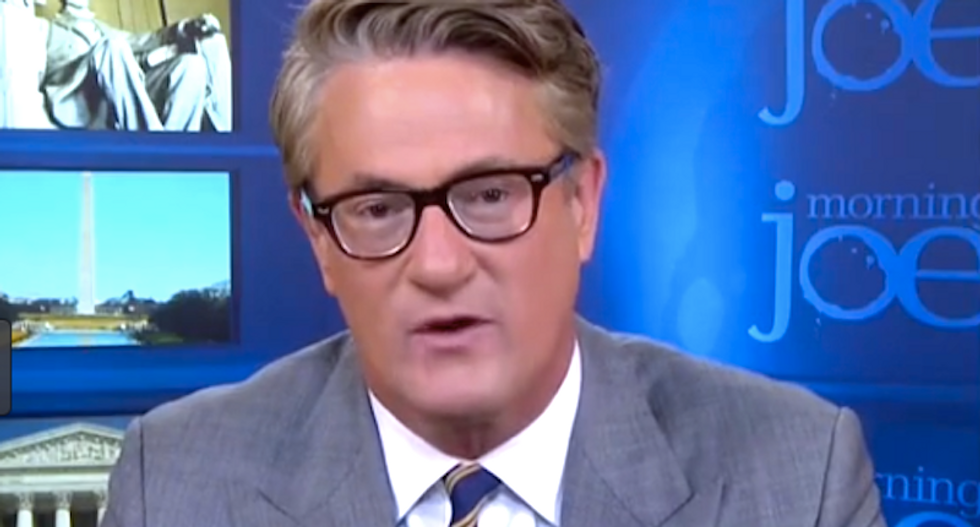 MSNBC's Joe Scarborough said he's a Republican "for now," but he admitted it's getting harder to defend what President Donald Trump has done to the party.

The "Morning Joe" host was appalled by Wednesday night's assault on a reporter by Greg Gianforte, a Montana GOP candidate for the U.S. House, which he said was directly inspired by the president's war on democratic institutions and the rule of law.

Scarborough said he was sickened by the GOP's embrace of Trump's bullying behavior.

"I will tell you this is not the party I grew up in," he said. "I'm not just talking about now. I'm talking about the brutish behavior from the top. I want to hear Republicans speak out against it, starting with (House Speaker) Paul Ryan and (Senate Majority Leader) Mitch McConnell, and say this is not acceptable and, no, we do not want (Gianforte's) vote here. We want no part of this guy."

Panelist Elise Jordan, another Republican-for-now, said the GOP simply cannot tolerate that type of behavior -- but she said party leaders are afraid of angering Trump's base.

"The cowardice of so many Republicans, being petrified of the 20 percent, 30 percent of hardcore Trump supporters, and supporters who are not moving no matter what Donald Trump does -- the party has to get over it if they want to have any viability after 2020," Jordan said.

Co-host Willie Geist pointed to The Guardian's account the incident, which involved the newspaper's own reporter, that showed Gianforte agreeing with an audience member that the news media was the "enemy" -- and then singling out a journalist and reminding his supporters they greatly outnumbered reporters at the event.

"Republicans have always felt like they've been treated unfairly by the press and usually -- certainly, a lot of them have a great point here," Scarborough said. "Again, this is -- that sounds like vintage Donald Trump."

Jordan pointed out that Gianforte led in the polls on the night before the special election, and he still reacted with brute force to a reporter's question about the Republican health care bill.

"If he's so unhinged that the night before he's about to win an election he assaults a reporter -- what's going to happen when there's a real national scrutiny put on his background, which is inevitably going to happen, he's been in a relatively minor race in Montana, that hasn't had the tough probe yet," Jordan said. "Someone who acts like that on a very important night of their career -- there are going to be other incidents, I presume."