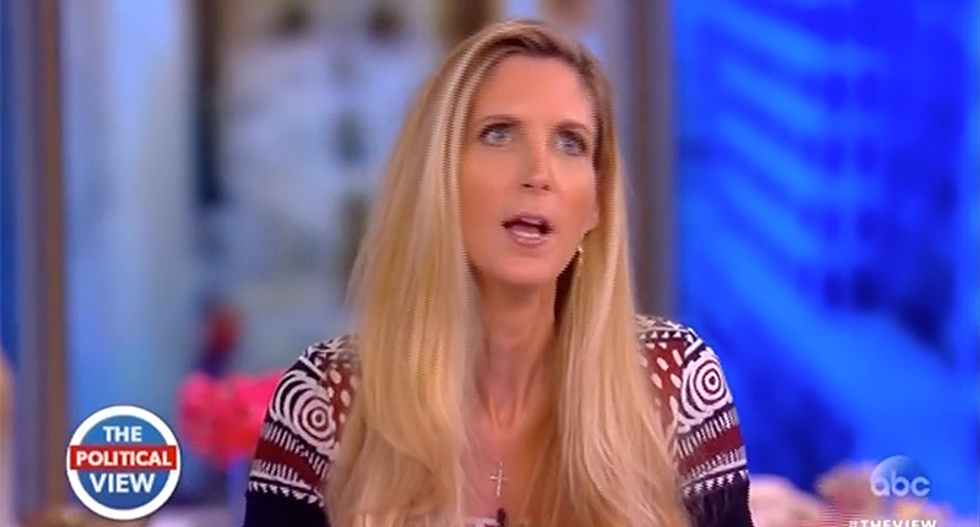 President Donald Trump doesn't hate the media he just hates the "fake news" industrial complex, according to conservative commentator Ann Coulter, despite all of the attacks on CNN, the "failing" The New York Times, The Washington Post and many more.

Monday on The View, co-host Joy Behar told Coulter that she believes the reason Trump attacks the media so much is that eventually he'll be caught in a scandal, perhaps the problems with Russia, and he wants his supporters to think it's "fake news."

"I mean, of all of the things to attack Trump on," Coulter said to Behar, laughing. "He isn't attacking the media he's attacking the fake media. There are so many lies about him."

"Like CNN?" Behar cut in as the audience gasped and booed.

"He attacks the New York Times. He attacks all the media," co-host Sunny Hostin agreed.

"Are you talking about all news or about fake news in general? Because he has lied quite a bit," Whoopi Goldberg noted.

Goldberg tipped her head back laughing hysterically as Behar cut in to try and reason with her. "I love that you people keep bringing up Hillary. Hillary isn't thinking about y'all. Let's talk about the man that is the president of the United States," she continued while the audience cheered.

When probed about specific lies, Coulter clarified that she's not talking about anything prior to him announcing his candidacy for president. An audience member can be heard screaming "what?!"

"He was a little nutty before he ran for president," Coulter admitted.

'The View' audience boos Ann Coulter when she... by sarahburris