'There is only one snowflake': Kimmel writer hilariously mocks Trump after he blocked her on Twitter 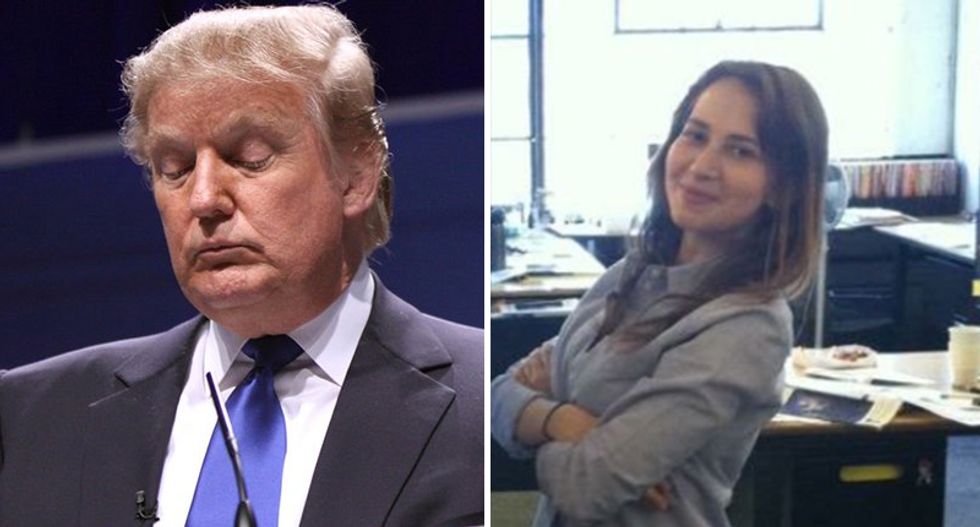 Comedy writer Bess Kalb was apparently so ruthless with her jokes aimed at President Donald Trump late Sunday night that he blocked her on Twitter.

The Emmy-nominated "Jimmy Kimmel Live" writer joined in a chorus of those poking at Trump's Sunday tweets about healthcare and tax reform. After reverberating mockery lit up his mentions, Trump fired off another tweet attacking the "fake news" for making fun of him. That was when Kalb was blocked.

"OH. MY. EFFING. GOD. The president of the United States just blocked me on Twitter because I hurt his feelings. #MAGA," she tweeted, showing a screen capture. "From now on, there is only one Snowflake."

Sunday, Kalb called out Trump for his tweets, pointing that he was very obviously trying to pivot to talk about issues instead of addressing a humiliating entrance on the global stage.

"Oh boy, honey. I've tried to lay off and let you be President like you said you would, but this is a new kind of simplistic rhetoric," she tweeted. "I know you're trying to pivot away from how embarrassing the big trip was for all of us to watch (Pushing! Pope! Saudi bowling!) but....this? Honestly, hun, this is all so far over your head. If you need to have another 'bone spur' and let Mike take over, no one will blame you."

"It is mortifying, yet unsurprising to me that the leader of the free world could be so wounded by the gentle ribbing of a comedy writer," she continued. "And if I could talk to him now I'd tell him: 'Donald, sticks and stones may break your bones but articles of impeachment will harm you.'"

It must have hit too close to home because she was blocked shortly after. She went on to tweet out the photo of the Wall Street Bull statue with the little girl statue standing up to him. "I'd like to summarize my feelings about this in one radical feminist sculpture," she said.

I'd like to summarize my feelings about this in one radical feminist sculpture: https://t.co/qMTDy9VieE
— Bess Kalb (@Bess Kalb)1496018718.0

"Today our president took more time to address a girl making fun of him on Twitter than the domestic terrorist who fatally stabbed 2 heroes," she said, further shaming the president.

In an official statement on her Instagram, Kalb addressed the controversy to her two cats Teddy and Al.

"No mother should have to explain the President blocking her to her garbage sons," she wrote of telling her cats, who ignored her. "Ok, f*ck you guys too."