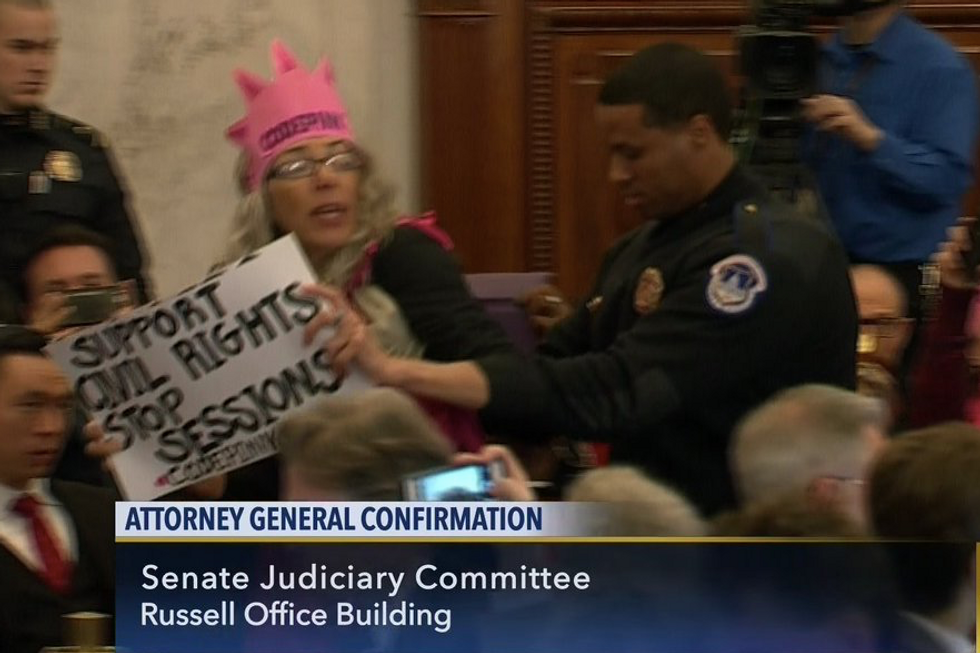 Federal prosecutors are pursuing charges against a 61-year-old woman who laughed out loud during the confirmation hearing for U.S. Attorney General Jeff Sessions. Her trial began this week in D.C. Superior Court , according to the Huffington Post.

Desiree Fairooz, an activist affiliated with the group Code Pink, burst into laughter in January after Alabama Sen. Richard Shelby (R) testified that Sessions had spent his legislative career "treating all people equally before the law." She was escorted out of the room by U.S. Capitol Police and arrested.

Prosecutors argued her laughter was “disorderly and disruptive conduct” intended to “impede, disrupt, and disturb the orderly conduct” of the hearing.

Two other Code Pink members, Tighe Barry and Lenny Bianchi, were also arrested during the Senate hearing after dressing up as Ku Klux Klan members and sarcastically cheering on the soon-to-be Attorney General.

All three protesters were charged with disorderly conduct. The charge carries a potential fine up to $500 and up to six months’ imprisonment.

Fairooz was also charged with another misdemeanor for allegedly parading, demonstrating or picketing within the Capitol, the Huffington Post reported.

“I felt it was my responsibility as a citizen to dissent at the confirmation hearing of Senator Jeff Sessions, a man who professes anti-immigrant, anti-LGBT policies, who has voted against several civil rights measures and who jokes about the white supremacist terrorist group the Ku Klux Klan,” said Fairooz in a statement.

“As an American who loves the constitution and the rule of law, I felt compelled to protest the nomination of Senator Jeff Sessions to become the number one law enforcement officer in the country,” added Barry. “His nomination and confirmation as Attorney General make a mockery of our judicial system and our constitution in general. Time has shown that our concerns were valid. Session is a terrible attorney general and is already setting back progress this country has made in the area of civil rights and race relations.”