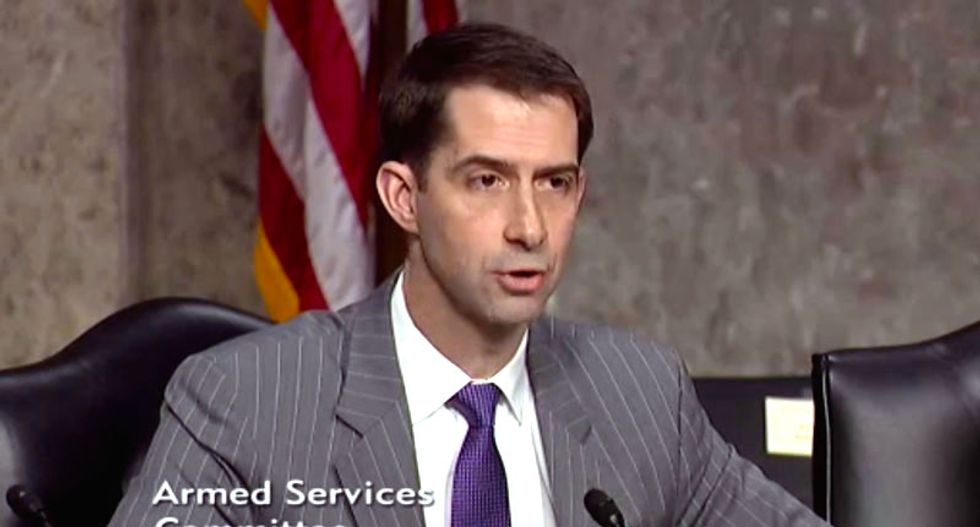 The Arkansas Republican questioned Adm. Mike Rogers, director of the National Security Agency, during a hearing Tuesday of the Senate Armed Services Committee, where he asked the official why his agency disagreed with the assessments of two other intelligence agencies that Russia intended to aid Donald Trump.

Rogers told the committee that evidence points to the likelihood that Russia tried to help boost Trump over Clinton, but he could not sign off on that explanation because he didn't believe enough evidence had been found to prove it.

Cotton conceded most of that evidence was classified and could not be discussed in the hearing, but he pointed to campaign statements Trump had made about boosting defense spending and North American oil exploration.

"None of those things seem to be favorable to the Kremlin," Cotton said. "Did your agency take those things into account?"

Rogers said the NSA had considered those remarks, and then Cotton recited a litany of statements and actions hyped for years by conservative media that he suggested showed weakness by former President Barack Obama.

"President Trump promised to reverse those policies, Secretary Clinton largely campaigned on continuity," Cotton said. "That doesn't sound to me something that the Kremlin would be happy about."

Rogers said the intelligence seemed clear that Russia preferred Trump, even if he couldn't say with certainty that Putin worked on behalf of the Republican candidate.

"Do you think, given that eight-year history of the Obama administration, that Russian intelligence and leadership felt emboldened to undertake the hacks of those e-mail systems and release them?" Cotton said.

Rogers declined to take the bait.

"Now, you are in to political judgment, sir, and that's not my area," Rogers said.