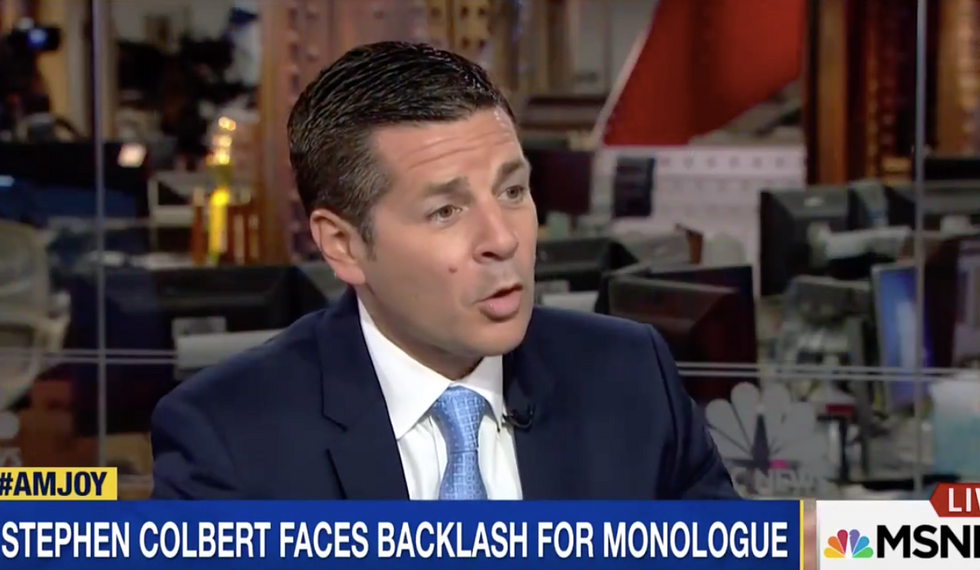 An MSNBC panel on Saturday mocked conservatives who are outraged by a joke Stephen Colbert made last Monday night -- and the fact that the FCC has now "launched an investigation" into the joke and said that it will take "appropriate action."

The panel -- host Joy Reid with comedians Dean Obeidallah, Scott Blakeman and Judy Gold -- discussed the irony of largely anti-LGBT conservatives objecting to Colbert's joke on the grounds that it was homophobic.

Obeidallah -- who wrote a Daily Beast column on the subject called "No, Trumpsters, One Colbert Joke Is Not an O’Reilly Equivalent" -- said being a comedian in the age of Trump means "never having to say you're sorry."

"Nothing is off limits with this guy," he went on. "I think comedians are playing a role in preventing him from being normalized."

"Too bad little snowflakes," he said. "We’re going to make as many jokes as we want. You need a safe space, go hide. Put on your big boy pants because it’s just beginning."

Judy Gold pointed to the ruckus kicked up by conservatives over right-wing provocateur Ann Coulter's right to speak on the University of California at Berkeley campus.

"The outrage that we had to listen to about Ann Coulter and her hate speech at Berkeley that the conservatives were, 'Oh, you know, there’s too much political correctness, too much of this and too much of that,'" said Gold. Colbert is "a comedian. He is telling a joke. Funny is funny."

Colbert's ratings have spiked in the wake of the remark, in which he said that Donald Trump talks "like a sign language gorilla that got kicked in the head. The only thing his mouth is good for is Vladimir Putin's c*ck-holster."

Rupert Murdoch to give deposition in Dominion's $1.6 billion lawsuit against Fox News: report

On Monday, The Washington Post reported that billionaire media tycoon Rupert Murdoch will be deposed as part of a $1.6 billion defamation suit by Dominion Voting Systems against Fox News.

"The lawsuit alleges that the network purposely aired false claims about Dominion’s role in the 2020 presidential election to boost ratings and fight off competition from more-conservative-leaning television networks," reported Jeremy Barr and Rachel Weiner. "According to the filing, Murdoch’s deposition will be conducted remotely, via videoconference."