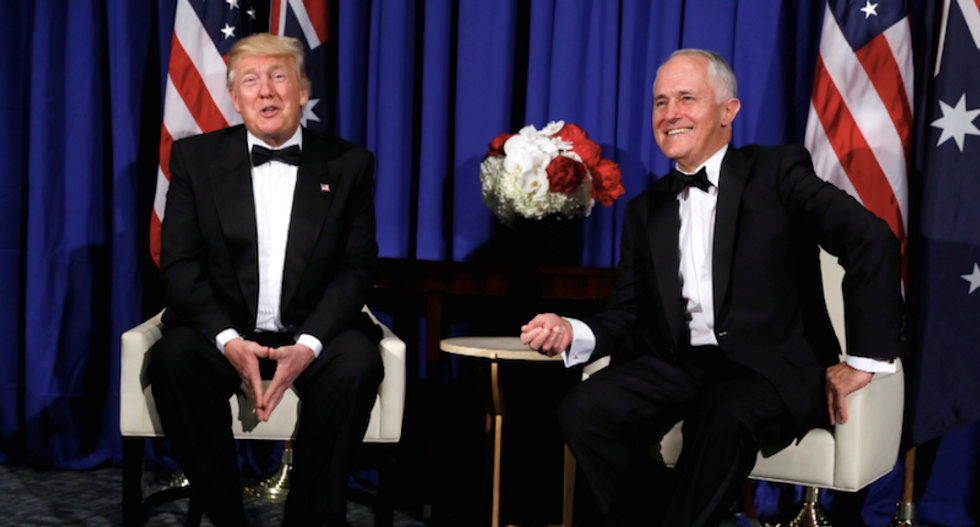 U.S. President Donald Trump meets with Australia's Prime Minister Malcolm Turnbull ahead of an event commemorating the 75th anniversary of the Battle of the Coral Sea, aboard the USS Intrepid Sea, Air and Space Museum in New York, U.S. May 4, 2017. (REUTERS/Jonathan Ernst)

U.S. President Donald Trump held his first-face-to-face meeting with Australian Prime Minister Malcolm Turnbull on Thursday, and declared that they "get along great," following an acrimonious phone call in January that strained ties between the two allies.

Dressed in tuxedos as they prepared to attend a dinner, the two leaders met on board the USS Intrepid, a World War Two aircraft carrier that is now a museum moored on Manhattan's West Side. Joined by their wives, the two leaders later attended a gala to celebrate the 75th anniversary of the Battle of the Coral Sea.

Turnbull was one of the first foreign leaders Trump spoke to after taking office on Jan. 20. The Republican president became irritated that he was expected to honor an agreement made by his Democratic predecessor, Barack Obama, to accept as many as 1,250 refugees held in Australian processing centers on remote Pacific islands.

Trump had broken off what was supposed to be an hour-long call after 25 minutes and later tweeted that the refugee agreement was a "dumb deal" and vowed to study it. The call aroused criticism and raised questions about his diplomatic skills.

Vice President Mike Pence visited Australia in April and made clear that while Trump was not happy about the refugee agreement, the United States would honor it out of respect for Australia. Under the agreement, Australia is to resettle refugees from three Central American countries.

Thursday's get-together with Turnbull was delayed because of Trump's hastily arranged White House celebration with Republicans from the U.S. House of Representatives after they narrowly passed a healthcare bill that would repeal and replace the 2010 Affordable Care Act, commonly known as Obamacare. The measure has yet to come before the Senate/

Trump and Turnbull were all smiles as they answered questions about the January phone call and the refugee deal during a picture-taking session.

"We get along great. We have a fantastic relationship, I love Australia, I always have," Trump said.

Turnbull added: "We can put the refugee deal behind you and move on."

Trump said the refugee deal had been "worked out for a long time" and that reporters had exaggerated the phone call.

Trump vowed to visit Australia as president, calling it "one of the great, great places" and noted he had many friends there. One such friend, pro golfer Greg Norman, was among the attendees at the Intrepid dinner.

In dinner remarks after their meeting, Turnbull celebrated the unity of spirit that brought the two countries together against Japan in World War Two, and said Australia and the United States are united against North Korea's nuclear and missile programs and are fighting together in Afghanistan.

"Today and together, we condemn and we resist North Korea’s provocation," he said.

It was Trump's first trip back to New York, his home and where he made his name and fortune, since the former real estate executive moved into the White House in January.

His motorcade passed hundreds of protesters as it arrived at the Intrepid in the early evening. Trump did not plan to visit Trump Tower, his home in midtown Manhattan where his wife, first lady Melania Trump, and their young son Barron still live, but instead was to spend the weekend at his golf resort in Bedminster, New Jersey.