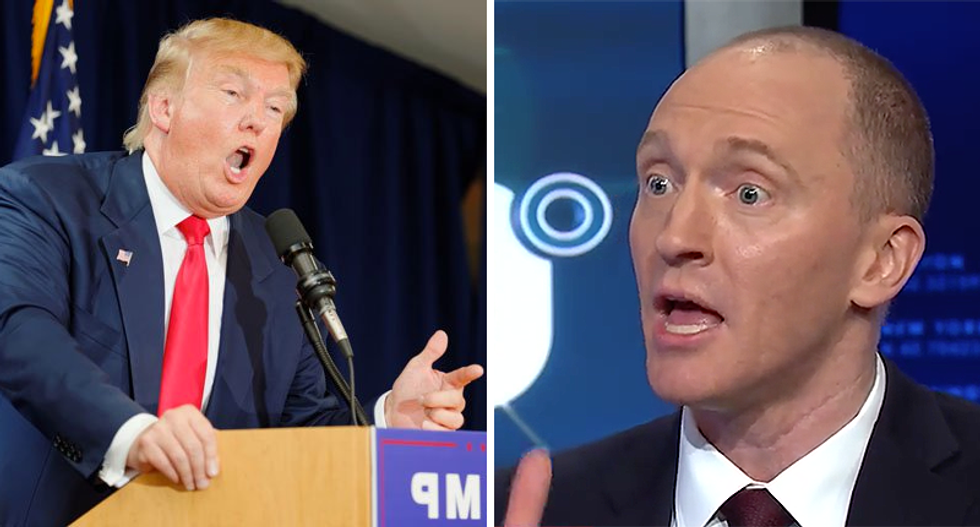 Page was the target of a secret court order in summer 2016 to monitor his communications as part of the ongoing investigation of possible collusion between the Trump campaign and Russia, and he left the campaign in September over those alleged ties -- which he denied as "complete garbage."

The president tweeted early Wednesday morning, a little more than six hours after posting a bizarre tweet containing the non-word "covfefe," that Democrats were afraid of Page's congressional testimony and no longer wanted him to appear before Congress -- after Fox News aired a report on it.

"Fox & Friends" broadcast a report shortly before Trump's tweet suggesting that Democrats had revoked Page’s invitation to testify before Congress, although the details of his testimony are still being worked out.

So now it is reported that the Democrats, who have excoriated Carter Page about Russia, don't want him to testify. He blows away their....
— Donald J. Trump (@Donald J. Trump)1496227062.0

Trump's tweets seemingly are based on recent articles from Breitbart News and the conservative Washington Examiner, which reported that Page sent a letter to Congress insisting on testifying before the House Intelligence Committee to counter "ongoing barrage of false information" from the FBI and CIA.

Breitbart followed up with another report that Page -- described as an "American finance professional who was tangentially and briefly associated with Donald Trump’s presidential campaign" -- had asked the House intelligence committee to investigate "collusion" between Hillary Clinton's campaign and the Obama administration to push claims about Russia.

Page told the Examiner that he might not be permitted to push back on "false or misleading testimony" by former FBI director James Comey, whose firing he cheered, or former CIA director John Brennan.

He didn't cite any specific claims by those former officials, but he disputed a "dossier" compiled by a former British intelligence agent that was reportedly used to secure a warrant against him under the Foreign Intelligence Surveillance Act.

Many of the Trump associates prominently mentioned in that unverified document, including the president's personal lawyer Michael Cohen, have later been targeted by law enforcement for investigation.

Manafort and Stone turned over documents last week to the Senate Intelligence Committee related to the probe, which is being investigated by both lawmakers and the Department of Justice under recently appointed special counsel Robert Mueller.