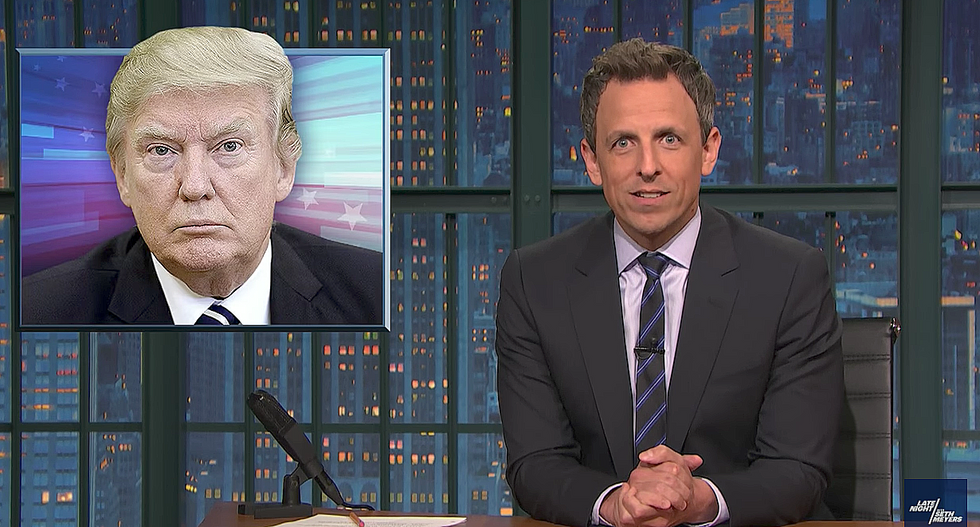 NBC’s “Late Night” host Seth Meyers on Wednesday nailed everything that’s wrong with Rep. Mo Brooks’ claim that people “who lead good lives” should pay less for healthcare, noting “If that were really how it worked, Donald Trump would have died three years before he was born.”

Meyers began his “Closer Look” segment by acknowledging FBI Director James Comey’s defense (during Wednesday’s Senate Intelligence Committee testimony) that, given the chance, he would again decide to disclose the existence of an FBI probe into Hillary Clinton while simultaneously concealing a probe into potential ties between Donald Trump associates and Russian operatives.

The “Late Night” host noted while “defending his decision to announce—eleven days before the election—that the FBI was reopening the investigation into Hillary Clinton’s emails,” Comey first “took us through the discovery of those emails,” by bringing up “this fella” Anthony Weiner. Weiner became a pivotal B-plot character in the 2016 election saga when new Clinton emails were obtained during a separate investigation into Weiner's allegedly perverse sexual acts. Comey mistakingly identified these emails as new pieces of evidence, when in fact they were copies of previously reviewed material.

Meyers later assailed Sean Spicer for refusing to take questions during Wednesday’s White House press briefing, noting that reporters were yelling after him like children at a playground.

The host then put the GOP’s latest iteration of the Obamacare replacement bill on blast, pointing to Rep. Mo. Brooks’ (R-AL) claim that people who ‘lead good lives’ shouldn't have to deal with the implications of  preexisting conditions.

“So what does that mean, people who are sick lead bad lives?” Meyers asked. “If that were really how it worked, Donald Trump would have died three years before he was born.”

Watch the vide below, via NBC: