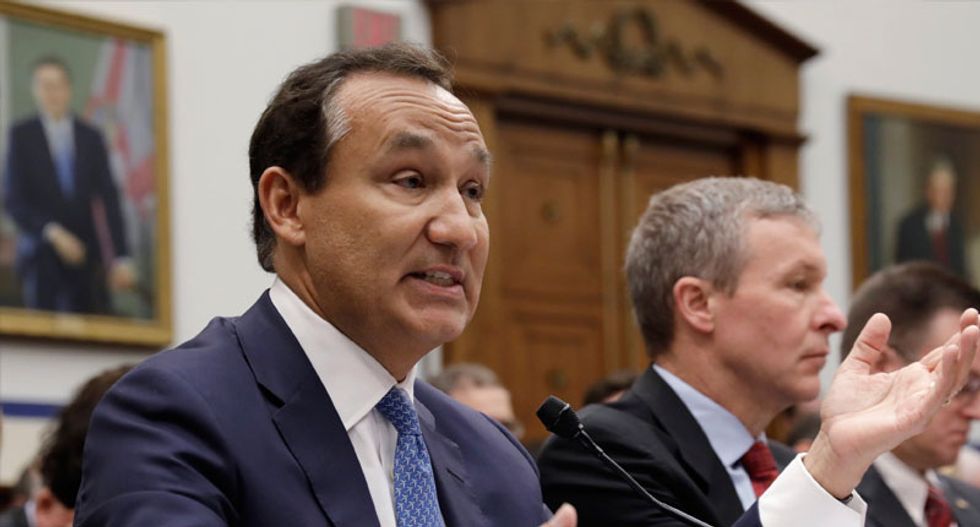 United Airlines CEO Oscar Munoz (L) testifies next to UAL President Scott Kirby at a House Transportation and Infrastructure Committee hearing on "Oversight of U.S. Airline Customer Service," in the aftermath of the forced removal on April 9 of a passenger from a UAL Chicago flight, on Capitol Hill in Washington, U.S., May 2, 2017. REUTERS/Kevin Lamarque

U.S. lawmakers on Tuesday threatened United Airlines Chief Executive Oscar Munoz and other airline executives with legislation to force improvements as they took carriers to task after a passenger was dragged off an overbooked flight last month.

Legislators from both sides of the aisle, many of whom fly back and forth to their districts weekly, recounted their own frustrations with delays and overbooking.

"If we don't see meaningful results that improve customer service, the next time this committee meets to address this issue I can assure you will not like the outcome," said Bill Shuster, chairman of the House of Representatives' transportation committee.

"We are not going away, we will hold you accountable and we expect real results," said Shuster, a Republican.

Republicans, however, largely back President Donald Trump's push to cut rules and regulations they say hamper business growth. The White House has not weighed in on whether new rules are needed to respond to airline customer service issues.

Consumer anger at cost-cutting by airlines boiled over when David Dao, 69, was violently dragged from a United flight at a Chicago airport on April 9 to make room for crew members.

Munoz took two days to apologize for the incident. In an often-tense hearing room on Tuesday, he apologized again.

"In that moment for our customers and our company we failed, and so as CEO, at the end of the day, that is on me," Munoz told lawmakers.

"This has to be a turning point."

The hearing was viewed a test of how the Republican-led Congress would respond to an incident that enraged air passengers across the country.

Munoz was joined at the hearing by United President Scott Kirby and executives from American Airlines , Southwest Airlines and Alaska Airlines .

American Airlines experienced its own black eye last month when a video went viral showing a woman in tears holding her young child after a fight with a flight attendant over a baby stroller.

United reached a settlement for an undisclosed sum with Dao last week and changed its policies by reducing overbooked flights and offering passengers who give up their seats up to $10,000. The airline has promised to no longer call on law enforcement officers to deny ticketed passengers their seats.

But Munoz defended the policy of overbooking, saying it helps the airline better serve passengers. American Airlines said it would not end the practice.

Alaska Airlines told the committee it is considering changes to its overbooking policy.

Southwest said it would upgrade its reservation system and change its cancellation policy so that it would end overbooking altogether.

"We are not going to go broke, I promise you that," said Bob Jordan, executive vice president at Southwest. Jordan said the airline expects the change will cut the number of incidents where customers are denied boarding by about 80 percent.