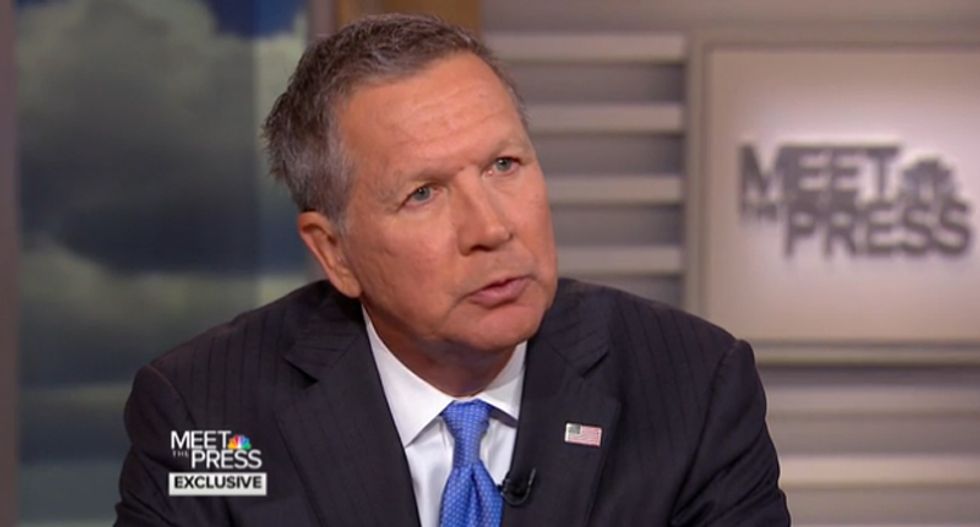 A group of about a dozen Republican governors is pushing for its own set of national healthcare reforms, flexing its considerable muscle in the national debate over the future of Obamacare as the U.S. Senate begins writing its bill.

Led by Governor John Kasich of Ohio, the governors are using a nine-page proposal they crafted in February as the platform to shape what they think a critical portion of an Obamacare replacement law should look like, according to a half dozen people who helped write the plan.

Among the group's recommendations for the Senate include maintaining the expansion of Medicaid, the government health insurance program for the poor and disabled, while also limiting federal spending for certain populations, according to a copy of the proposal.

Members of the group, which include governors from Utah, Tennessee and Michigan, are also now looking to form a bipartisan coalition of states to propose reforms for the individual insurance market, according to one source, that they hope the Senate will also use. To see a graphic, click http://tmsnrt.rs/2qOZScv

They have not yet met or decided on specific reforms about the individual insurance market, but the goal is to address issues such as how to make insurance more affordable and stabilize the markets.

The House of Representatives narrowly passed its national healthcare bill earlier this month, called the American Health Care Act, which would slash federal Medicaid funding by more than $800 billion over the next decade.

It has prompted fierce criticism from both Republican and Democratic governors.

Kasich recently called the bill "inadequate," and said it would leave millions of people without affordable coverage and "living in the emergency rooms again."

Pressure is building from their constituents.

The Reuters/Ipsos poll, which has been tracking public opinion on health care issues for the past several years, has found that Republicans are more supportive than they were in 2013 of benefits including expanded Medicaid and insurance subsidies for low-income families and a government requirement that small businesses provide insurance for their employees.

The governors group is looking to the Senate for massive changes as they begin writing their own bill.

Several groups, from insurers and hospitals to medical groups and patient advocates, are trying to influence the Senate. But the governors carry extra weight because they will ultimately be responsible for implementing whatever healthcare overhaul is signed into law, and Republicans in Congress have repeatedly spoken about the need to have fewer federal regulations apply to Medicaid and commercial insurance.

Under Obamacare, more than 30 states, including about a dozen Republican-led states, expanded Medicaid. One of the thorniest issues Republicans have grappled with is treating both expansion and non-expansion states equally. Governors from both types of states united to craft Medicaid proposals in the hope that their voice would carry added weight and provide a surer path for lawmakers.

The governors are also in the same boat politically as U.S. senators because both are elected statewide, rather than in smaller districts as House representatives are. So many governors and their senators have been better aligned on what healthcare reform should look like, several of the sources said.

Several governors and their staff said they have been in regular contact with their senators, and will be pushing for the Senate to use the governors' set of reforms as a framework in writing its bill.

Senator Rob Portman of Ohio wrote in an op-ed Monday that he and other senators tasked with writing a healthcare bill have continued to engage with governors, "many of who share my concerns about Medicaid but who also want more flexibility to ensure they can design health care programs that meet the individual needs of their states."

He added that the Senate will continue to work with governors on healthcare reform.

"They are definitely hearing our concerns and questions. They have been very attentive to our interests," said Nathan Checketts, deputy director of the Utah Department of Health.

The group of Republican governors has worked to have a unified voice to reconcile needs among a diverse set of states, including Arizona, Illinois, Wisconsin, Arkansas and Nevada. Its leaders, which also include Governor Rick Snyder of Michigan and Governor Doug Ducey of Arizona, deliberately chose some participants from states with influential Republican senators who would become key players in a federal healthcare overhaul.

A 13-member Senate panel has been tasked with writing a healthcare bill, and at least five of its senators are from states from the Republican governors' group, including Portman, Orrin Hatch of Utah, Mike Lee of Utah and Lamar Alexander of Tennessee.

Other Republican senators with governors in the group - including Dean Heller of Nevada and Jeff Flake of Arizona - are up for reelection in 2018.

As Senate Republicans take up the bill, one of the most complicated policy and political issues they must grapple with is Medicaid reform.

States that expanded Medicaid, such as Ohio and Michigan, have said a healthcare overhaul must protect those who gained coverage under Obamacare. Non-expansion states, meanwhile, have said they do not want to be penalized with less federal funding because they did not expand and therefore cover fewer people.

The governors' proposal recommends maintaining Obamacare's Medicaid expansion and giving other states the opportunity to expand, but capping federal spending on certain populations through either block grants or per capita caps.

It would provide states the option to phase in other groups, such as parents and children, to per capita caps or block grants, and it recommends reducing federal regulations on states and their Medicaid programs.