WATCH: Baltimore demolition crew gobsmacked as they realize they just tore down the wrong building 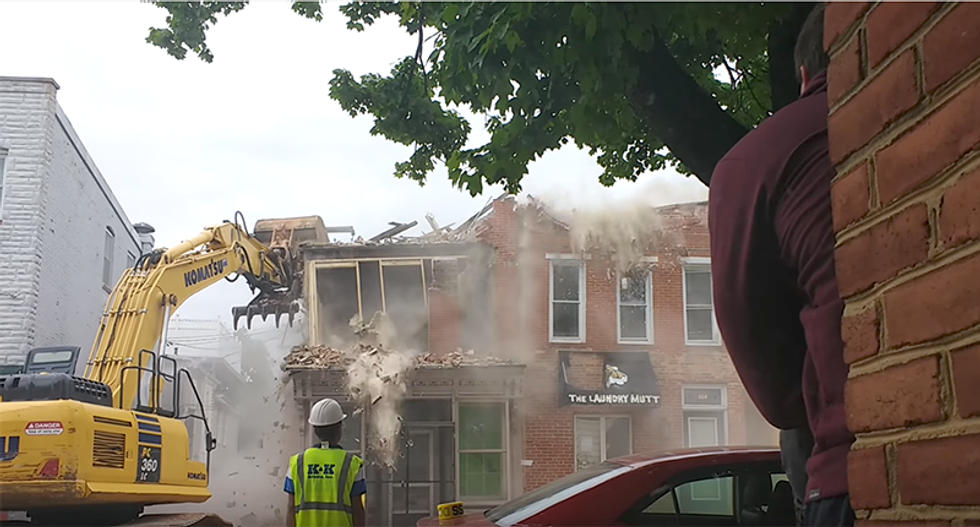 The Baltimore City Department of Housing outsourced an emergency demolition of an old row house with a "bowing exterior wall" and massive crack in the wall to K&K Adams. Neighbors gathered to watch the blighted building finally taken down. That's when they witnessed the excavator topple the building next door instead.

According to a Baltimore Sun report, 214 E. Fort Ave. partially collapsed in a matter of seconds, leaving only a cloud of dust and debris.

"We were like, 'Oh my God!'" neighbor Lauren Singer said.

Attached buildings are demolished frequently in the east coast city, but not this one, and no one is revealing why.

"If a property presents an imminent danger, Baltimore City will take whatever action is necessary to protect the public, including emergency demolition," Housing Department spokesperson Tania Baker said. "Precautions are always taken with adjacent properties, in this case ensuring that it was unoccupied."

The building next door had not been condemned but Tyler Banks, the owner of TD Development and Charm City Builders explained that he was there for hours concerned about the building that was. He has no idea why the wrong building was torn down, noting he did a walk-through with the city inspectors days leading up to the mistake.

"I was there until about 2 in the morning, just worried about the whole situation, just wanting to make sure everyone was safe," he said.

"I take a lot of pride in the work we do, so for me, the last thing I'd ever want to see is something like this happen," Banks said about his renovation company.

His listing for the building called it "a larger-than-average Federal Hill unicorn rowhome" that is "under construction." He explained it is considered a "unicorn" because of the size, location, off-street parking and roof deck. The renovation called for a four and a half bathroom makeover and they anticipated it being completed by August.

It is now a pile of dust.

Watch the video of the demolition below: