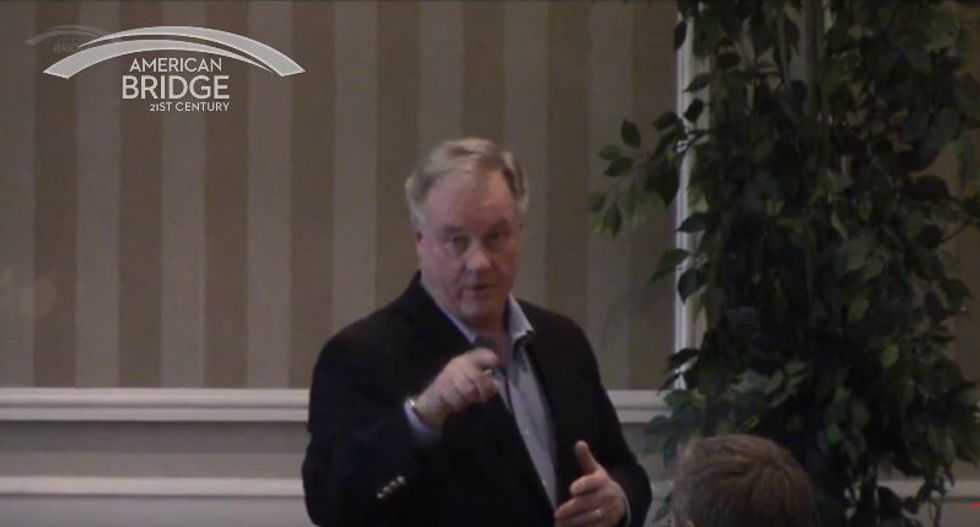 The first of the two videos, both published by the American Bridge Political Action Committee, shows Wagner giving a speech at his country club when he notices the cameraman around the 4:45 mark.

In the video, he asks the person filming who he's with, and when the cameraman responds with his employer (the American Bridge PAC, a group dedicated to "Holding Republicans accountable"), Wagner, who has compared himself to Donald Trump, shifts gears.

Wagner first grills the tracker with questions about how he got in, and then tells him, very matter-of-factly, that he's going to "confiscate" his camera.

The first video ends as Wagner takes the man's camera, but the second (filmed on what appears to be a smartphone camera) paints a much scarier picture when the gubernatorial hopeful appears to push the tracker.

He continues to film while following Wagner and asking for his camera back, and more than once claims that the senator assaulted him. They finally are met by country club management, who tell the tracker he doesn't "belong" on their private property.

He reminds them that he is bleeding from the alleged assault and that the state senator took his camera, while also explaining his purpose for being at the event. Wagner walks back into the frame, at which point the tracker tells him, "you just assaulted me".

"No I didn't," Wagner replied. The situation appears to de-escalate from there, and the police were reportedly called.

In a statement to the Philly Inquirer, American Bridge's communications director Lizzy Price said the footage is proof that Wagner is unfit for office.

"Scott Wagner's actions today show how unhinged he truly is," Price said. "If he can't handle the pressure of the campaign, what makes him think he can handle leading the state?"

After the videotaped alleged assault went viral, some in Pennsylvania have also expressed concern about Wagner.