WATCH: Conservative gets destroyed on CNN after claiming Trump’s RussiaGate is just as bad as Obama 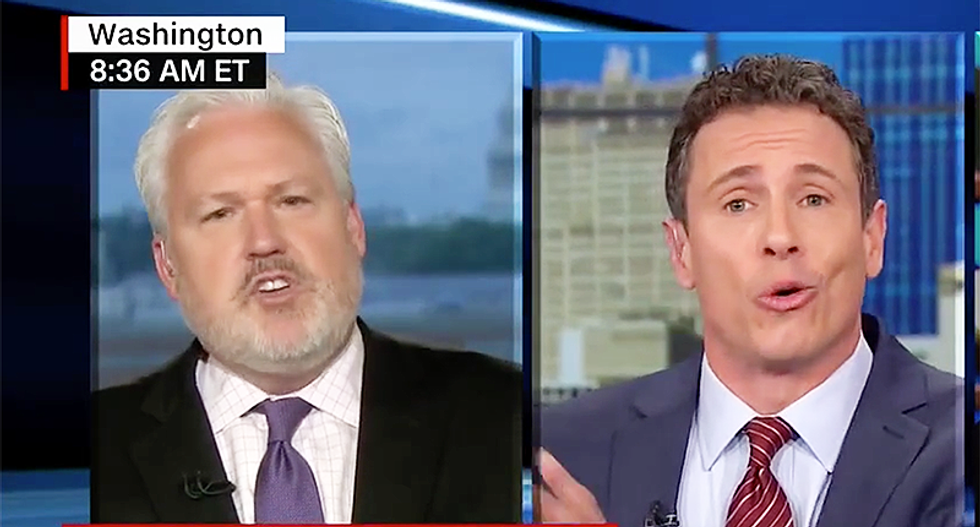 When Cuomo brought up President Donald Trump bragging about firing Comey and admitting "the pressure is off me from that Russian investigation," he wondered what Schlapp would have said if former President Barack Obama had said or done the same thing.

"Matt Schlapp's beard would hop off his face and run down the street," Cuomo said."How can you justify that kind of behavior from a president of the United States? America first?" he asked citing Trump's campaign promise.

Schlapp then turned to blame Obama, saying that Trump's alleged collusion was similar to Obama telling Russian Prime Minister Dmitry Medvedev he would have "more space" and "greater flexibility" to deal with issues after the 2012 election.

"We all understood," Schlapp claimed.

"You think that sizes up to James Comey, the head of the FBI 'he's a nutjob,' Matt?" Cuomo asked, shocked. "'That Comey is a nutjob. I got that Russia pressure off me now.' Forget about Obama, forget about him, he's gone. History books, my friend. The question is, what did Trump mean and can you back, do you support him saying that about Comey to Russian officials."

Schlapp pivoted and tried to say that it was fine for Trump to fire Comey. Cuomo called him out on it saying that he was avoiding the question.

"He called him a nutjob to the Russians and said that the pressure is off of them. How do you feel about that?" Cuomo asked again. "Good move? Strong move?"

Schlapp said that what Trump was trying to do was explain to the Russians that there is nothing to the accusations of collusion.

"You think he needed to tell the Russians there is nothing to exactly what happened and why they would be the perpetrators?" Cuomo asked laughing. Schlapp tried to say that they were having a conversation about how silly it was. "Oh, OK. It's good to know you think the president and the Russians are on the same page about what happened. It's good."

"I don't know what happened and I will wait for the outcome of the investigation," Cuomo said. Schlapp said he would too but Cuomo called BS. "No, you're not. You're trying to spin it. The whole righty attack machine."

Schlapp said that he was trying to answer the questions but Cuomo hammered him saying that Schlapp "answered it by saying but Obama, dot, dot, dot." Schlapp said that his Obama anecdote was "true." Cuomo said it wasn't "because it's not an answer to my question."

"One of your kids comes up and you are accusing them of spilling something and they tell you about what one of their siblings did the day before," Cuomo explained.

Watch the schooling below:

WATCH: Conservative shill get his bum handed to... by sarahburris