'Worth fighting for': Watch Sally Yates tell Harvard Law grads why she stood up to Trump 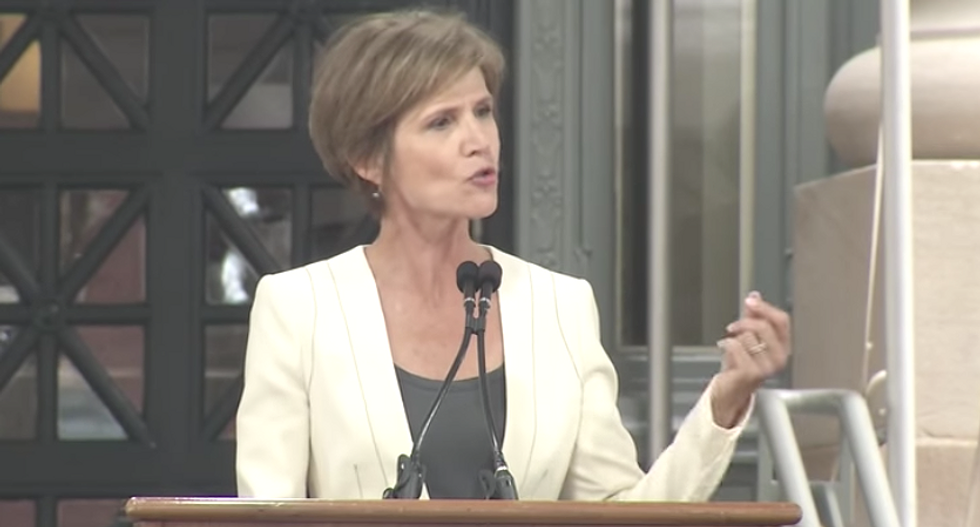 Sally Yates, the heroic former acting attorney general who took on Donald Trump’s immigration executive order, spoke at her alma mater Harvard University on Wednesday, telling 2017 graduates her decision to go against the administration’s Muslim ban was “illustrative of an unexpected moment where the law and conscience intersected.”

In what the New York Times described “a fierce, and sometimes personal speech,” Yates took Harvard graduates through her decision to stand against Trump’s agenda. The former acting attorney general noted she never expected her time working with the Trump administration would become a “defining moment” in her life.

Instead, she said, defining moments “can arise in scenarios we would have never expected, and don’t come with the luxury of a lot of time for you to go inside yourself for some serious introspection.”

Yates told graduates she first learned of Trump’s travel ban on her way to the airport, adding she knew the Justice Department would be forced to defend the president’s executive order. According to her own account, Yates considered resigning, but thought the move would be detrimental to the DOJ.

“I believed then, and believe now, that resigning would have protected my personal integrity, but it would not have protected the integrity of the Department of Justice,” Yates said.

Speaking of the aftermath of her very public firing, Yates argued taking risks and “willing to be wrong” can “sometimes be a lonely place to be.”

“But I’m hoping that fear of being wrong won’t keep you from acting,” Yates said. “Because inaction, doing nothing, or simply going along, that’s a decision, too. And it seems the times in my life that I haven’t acted that’s when I’ve regretted it the most.

“Doing your job means you are not simply a reflection of someone else’s talents or opinions,” Yates said of her decision to defy her former boss. “You’re the person to whom a leader turns when he or she needs to hear the truth.”

Watch the video below, via Harvard Law School: