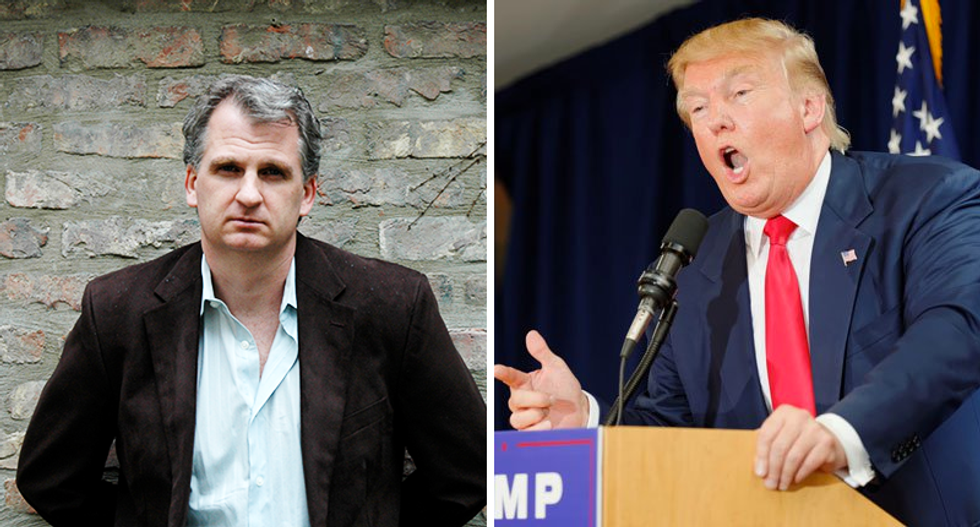 Yale University Professor Timothy Snyder's recent book focusing "On Tyranny" not only puts President Donald Trump in context with other 1930s fascists but it walks readers through steps for the resistance to maintain freedom.

In a recent interview for Chauncey DeVega's podcast, Snyder explained that Americans assumed nothing bad would ever happen once the Cold War ended. Trump managed to tap into the idea that the U.S. isn't a democracy anymore so people should simply let him be their very own oligarch. But because Americans tend to throw around terms like "fascist," "dictator" and "Hitler," the idea loses its meaning. Add to that, Americans tend to believe in our own exceptionalism.

"As I see it, there are certainly elements of his approach which are fascistic," Snyder explained. "The straight-on confrontation with the truth is at the center of the fascist worldview. The attempt to undo the Enlightenment as a way to undo institutions, that is fascism."

Fascists during the 20th century were quick to urge putting aside the facts. They also tend to use language similar to Trump's during his rallies. They name enemies, remove opponents and use blunt slogans and soundbites over and over again.

"And Mr. [Steve] Bannon’s preoccupation with the 1930s and his kind of wishful reclamation of Italian and other fascists speaks for itself," Snyder notes.

At the same time, somehow the Democrats became the status quo party while Republicans became the party seeking to undo the system. Bannon's fascination with the Fourth Turning plays into it as Bannon seems to want to instigate the next great turning so that he can craft the future the way he wants. Bannon believes the only way we can usher in a new world order with a “massive reckoning” that results in conflict, thus he eggs on such conflicts.

Trump is allowed to soldier on with one failure after another as evidence of his incompetence staggers around the White House in a bathrobe. As a television personality, he's judged only by those standards, not by the standards we hold real political leaders and public servants.

Snyder writes in his book that Trump will likely have his own conflict that brings about the "massive reckoning" Bannon seeks. Something like Hitler’s Reichstag fire that is either a war with North Korea, Iran, China, Russia or any of the other countries he's antagonized over the last 100 days. In fact, Snyder said that it was "inevitable" that Trump and his team would try such an obvious stunt.

"Whether it works or not depends upon whether when something terrible happens to this country, we are aware that the main significance of it is whether or not we are going to be more or less free citizens in the future," Snyder explained. "My gut feeling is that Trump and his administration will try and that it won’t work. Not so much because we are so great but because we have a little bit of time to prepare. I also think that there are enough people and enough agencies of the government who have also thought about this, and would not necessarily go along."

Snyder's book On Tyranny: Twenty Lessons from the Twentieth Century outlines steps Americans can take to fight back. He anticipates we'll know within the first year which direction Trump is taking and the degree to which it will work. Right now, however, Americans are already taking steps to resist including marches, rallies and more. The problem is that Trump and his people have already started.

"Every day you don’t do something, it makes it less likely that you will ever do something. So you’ve got to get started right away," Snyder said. "Don’t obey in advance, because you have to start by orienting yourself against the general drift of things. If you can manage that, then the other lessons — such as supporting existing political and social institutions, supporting the truth and so on — those things will then come relatively easily if you can follow the first one, which is to get out of the drift. To recognize that this is the moment where you have to not behave as you did in October 2016. You have to set your own habits now."