A year on, victims of Florida club shooting honored at pre-dawn ceremony 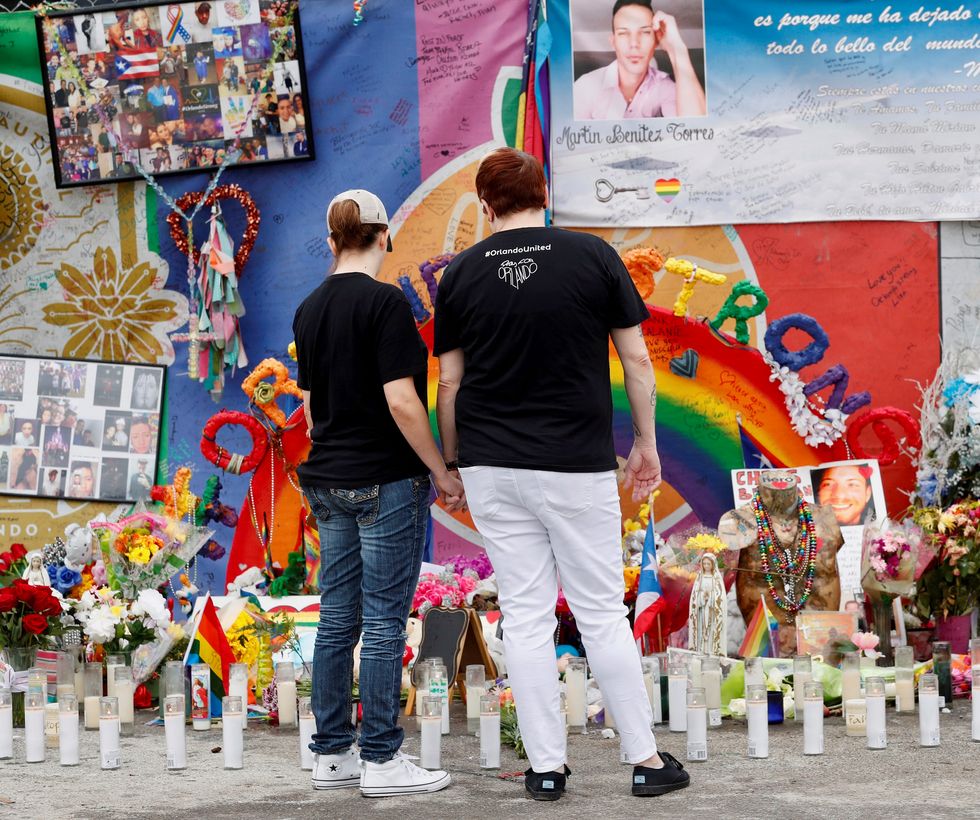 Guests visit the memorial outside the Pulse Nightclub on the one year anniversary of the shooting, in Orlando, Florida. REUTERS/Scott Audette

The names of the 49 people killed in a Florida nightclub last June were read aloud early on Monday in a pre-dawn remembrance marking the exact moment a year earlier when a gunman transformed a dance party into a massacre.

The private gathering at Orlando's Pulse nightclub at 2:02 a.m. (0602 GMT) was the first in a series of events at which victims' names will be memorialized with performances, prayers and candlelight vigils across the country on "Orlando United Day."

On the first anniversary of the worst mass shooting in modern U.S. history, officials asked Americans to join in acts of "love and kindness" to honor victims of the three-hour June 12 rampage at the now-shuttered gay club, including survivors still reeling from emotional and physical wounds.

"Following the Pulse tragedy, we showed the world that Orlando would not be defined by the act of a hate-filled killer, but instead defined by our response of love, compassion and unity," Mayor Buddy Dyer wrote in a blog post.

Hundreds gathered outside the club late Sunday and early Monday, including scores of people dressed in white with angels wings and carrying lanterns. The "angels" first appeared in the wake of the tragedy to protect and support family and friends of the victims.

"We will make sure the world is a better place because of our 49 angels," WKMG-TV quoted Orange County Mayor Teresa Jacobs as saying at the service before a performer sang "Over the Rainbow" to close the service as many on hand sobbed.

Many who came to pay respects said they were there for the first time since the shooting, with the tragedy still too raw.

The gunman, Omar Mateen, 29, opened fire shortly after the last call for drinks on the club's popular Latin night. He gunned down patrons on the dance floor and sprayed bullets at others cowering in bathroom stalls.

Holding hostages during his standoff with police, Mateen claimed allegiance to a leader of the Islamic State militant group before he was killed in an exchange of gunfire with authorities.

His widow, Noor Salman, was arrested in January on federal charges of aiding and abetting Mateen's attempt to provide material support to a terrorist organization, and lying to authorities investigating the massacre. She was not present for the attack and has pleaded not guilty.

Along with the events in Orlando, vigils and rallies were planned across the United States in a show of solidarity with victims of the attack, which authorities called a hateful act against lesbian, gay, bisexual and transgender (LGBT) people.

On social media, supporters sought to call attention to their legacy with a campaign using the tag #HonorThemWithAction.

The Center, an LGBT advocacy group in Orlando, asked supporters to post photos of their events so survivors and the relatives of victims could see they had not been forgotten.

"A big part of the healing process is to see, 'I am not alone in this'," said Terry DeCarlo, its executive director.