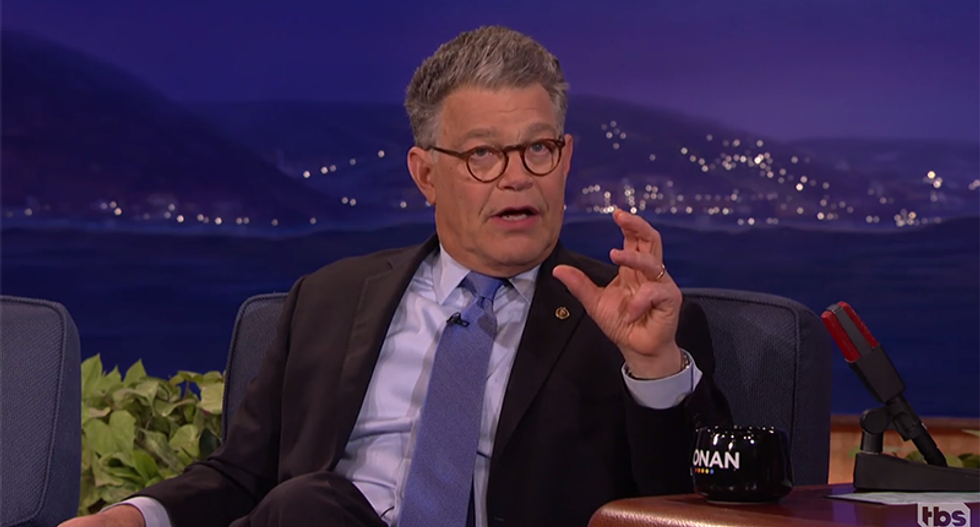 Senator Franken sat down with actress Olivia Wilde as part of The New York Times' "Table for Three" feature where, "two celebrities join Philip Galanes for a meal and conversation."

Wilde stars in a new Broadway adaptation of Orwell's 1984 that is "swimming in relevance" given President Trump's, "frequent complaints about 'fake news' and propensity to trade in demonstrable falsehood."

Franken explained how some people refuse to accept reality if it differs with their politics.

"Some people take sides. You’re on a team, and that’s that," Franken observed. "The first iteration of the G.O.P. health bill, which was better than the one that passed, had 17 percent support from the American people. That’s the exact same number as Americans who said they’ve seen a ghost."

Actress Wilde, who explained how she'd known Senator Franken for decades, talked about taking the Broadway role after the November election as a "way to manifest my daily outrage."

"I wanted to talk beyond my own choir. The great thing about Broadway is that it’s seen by so many different types of people. And the great point of this play is that we have to get beyond 'groupthink' and start thinking for ourselves," Wilde suggested. "I don’t plan to convert large groups to the left, not if they came in as Republicans. But I want everyone to leave the theater questioning what we’ve been told and knowing that’s our job."

"You can do 'groupthink' without anyone lying. Everybody can be wrong on an issue — like Vietnam for a long time," Senator Franken explained. "That’s a danger on Capitol Hill that’s neither a right nor a left issue. You worry about yourself."

The debate over Trumpcare was obviously examined in the lunch.

"We have a president who campaigned on the promise of a new plan with better coverage than Obamacare. And House leaders are still claiming no loss of coverage in their plan," the host of "Table for Three" said. "Is this classic 1984 double-think, the truth and a lie existing in people’s minds simultaneously?"

"There are so many different lies to unpack here," Franken responded. "During the campaign, Trump said he would not cut Medicaid, but this has about $1.5 trillion in cuts: more than $800 billion for this health care plan and over $600 billion in other savings."

"I go all around Minnesota, talking to people at rural hospitals and community round tables. People are literally crying about this," Franken continued.

Wilde took a mother's perspective on lying by President Trump.

"Kids lie without any real strategy. That’s why Trump seems so much like a toddler sometimes. His tendency to lie, when it’s clearly a lie, is something small children do," Wilde suggested. "They also bully and take toys from each other. It’s something you’re supposed to grow out of by the time you’re 70."

The new play by Robert Icke and Duncan Macmillan opens Thursday on Broadway.