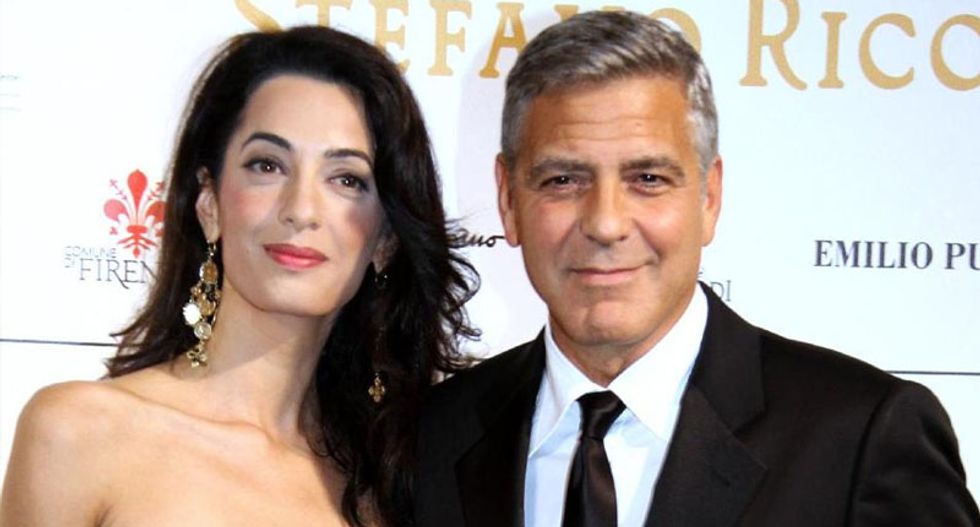 US actor George Clooney with his fiancee Amal Alamuddin in Florence on September 7, 2014 (AFP Photo/)

Amal Clooney gave birth to twins, a boy and a girl, on Tuesday, her husband George Clooney's publicist said, the first children for the international human rights lawyer and her movie star spouse.

Amal Clooney and the Oscar-winning star of films like "Ocean's Eleven" and "Three Kings" married in Italy in 2014, making them one of the world's biggest celebrity couples.

"This morning Amal and George welcomed Ella and Alexander Clooney into their lives. Ella, Alexander and Amal are all healthy, happy and doing fine. George is sedated and should recover in a few days," publicist Stan Rosenfield said.

He did not say where the twins were born.

Amal Clooney, 39, and George Clooney, 56, adopted a low profile during her pregnancy, keeping the news private for months before it was confirmed in February by the actor's close friend, Matt Damon.

Since then, the couple, who have homes in England, Italy and the United States, have said little about the pregnancy.

Amal Clooney has largely continued her work as a human rights lawyer, addressing the United Nations in March and urging the international community to investigate crimes committed by Islamic State in Syria and Iraq.

Despite their silence, celebrity news media outlets have speculated for months about the sex of the twins, where they would be born and in which country they will be raised.