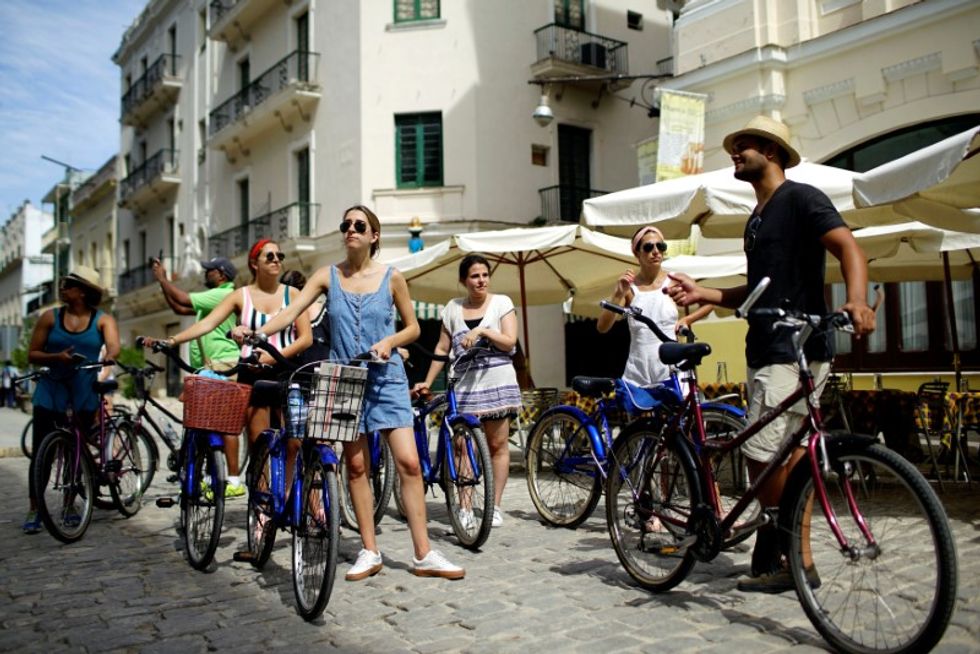 A group of tourists from the U.S. take a guided bicycle tour in Havana, Cuba June 17, 2017. REUTERS/Alexandre Meneghini

American travelers who long to swill a cocktail at Havana's legendary Sloppy Joe's bar or dive into the rooftop pool of its newest luxury hotel had their dreams dashed when U.S. President Donald Trump announced his new Cuba policy this week.

In a setback to the U.S.-Cuban detente negotiated by his predecessor Barack Obama, Trump on Friday ordered tighter restrictions on Americans traveling to the Caribbean island and a clampdown on dealings with its military, which owns many of the capital city's top establishments.

"You could say, 'You could buy a drink anywhere,' but we want to come to a famous, very nice place," said Russell Francis, 35, a special education teach from Houston, after visiting Sloppy Joe's, which won renown during the 1920s U.S. Prohibition era when American tourists flocked to Havana to drink and gamble to their heart's content.

The watering hole, with its 60-foot (18-meter) bar immortalized in the 1959 movie "Our Man in Havana," was frequented by film stars such as John Wayne, Spencer Tracy and Clark Gable. Many Americans have headed there again since detente to soak up its historic atmosphere.

While there is a growing number of private sector joints in Old Havana, considered one of the jewels of colonial architecture in the Caribbean, virtually all the state hotels and eateries are owned by the military.

"Part of the beauty of being in the city is the historic aspect," Matt Flynn, 30, an accountant from New Orleans, said as he wandered along popular Calle Obispo where live salsa music floats out from restaurants and bars. He said he was disappointed by Trump's move, although he understood the principle.

Lauren Sivan, 39, of Los Angeles said she was glad she slipped into Cuba before the policy shift and was still able to stay at the Gran Hotel Manzana Kempinski, owned by the tourism wing of the military, Gaviota.

The stunning property, in a renovated Belle Epoque mall, opened this month billing itself as Cuba's first luxury hotel, with a vast spa, rooftop terrace and cigar lounge.

"We're just so glad we came now," said Sivan, who was visiting Cuba for a long weekend with a group of friends.

U.S. visitors tripled in number in the wake of 2014 detente, emboldened by Obama's easing of the travel ban. Many came in under the self-directed "people to people" category, which Trump is eliminating.

Americans like Flynn and Sivan said they would not have undertaken the trip under the new rules, which make Communist-run Cuba more like the "forbidden island," just 90 miles (145 km) from Florida.

Confusion remains about what will be allowed and whether individual visitors could simply come in under the "support for the Cuban people" category now. Experts say the devil will be in the details of the regulations to be drafted over coming months.

Similarly, it is not yet clear how the ban on dealings with companies affiliated to the military will work.

GAESA, the Armed Forces Business Enterprises Group, is involved in all sectors of the economy. That means when you enter a shop in Cuba to purchase a bottle of water, soda or beer, you probably are patronizing a military establishment.

"They are not marked so you would have to do your research," Flynn said. "It's very hard to police because if you come without tour guide, it's cash and there aren't receipts."

Forcing would-be visitors into organized trips, issuing lists of which establishments they could not visit and auditing those tours would go some way to solving that issue. But it also would give the Cuban government, which sanctions tours, more control over what visitors see and likely reduce Americans' contact with ordinary Cubans.

"You would probably have to go through a tour group which has its advantages but it would be considerably more expensive and very structured," said Christian Walther, 26, of Baton Rouge, Louisiana.

Some travelers said they understood why Trump did not want U.S. dollars going to the Cuban military but others said it would hurt Cubans who benefited from the recent tourism boom, using generous American tips to support their families.

"It is ridiculous," said Bronwyn Hennessy, 44, who runs a fishing lodge in Montana and was wrapping up a fly fishing tour on the island with a night in Havana. She said she would not let the new restrictions dampen her desire to explore the island further.

For the adventurous, there were always other ways to slip into the island. She had entered previously via Cancun, Mexico, asking the Cuban officials not to stamp her passport.

"If we come again, we will probably sneak in," she said.