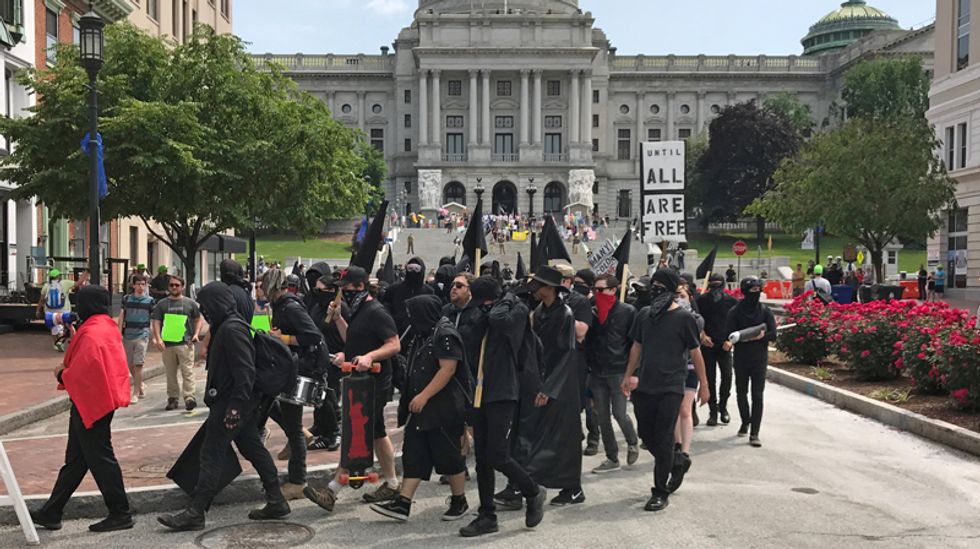 Alt-right events are harvests of hate. They draw militants seeded by Donald Trump, fertilized in the muck of the internet, and nurtured by the more than 900 hate groups around the United States.

Take the “March against Sharia” on June 10. It was organized by ACT for America, described by the Southern Poverty Law Center as an anti-Muslim extremist group. It planned more than 20 events around the country, and according to media accounts most rallies drew a few dozen at most.

Seattle’s was one of the largest, with perhaps 75 supporters. But it was dwarfed by about a thousand demonstrators whose non-stop chants, horns, and whistles led the anti-Sharia organizers to pull the plug on their event some two hours early.

Most attendees were young white men clustered in small groups based on similar haircuts, costumes, flags, and patches. There were “Western-chauvinist” (and male chauvinist) Proud Boys, militiamen, a knot of fashy bros, and flag-waving “Kekistanies,” invented by 4chan trolls. Wolf and Jerusalem cross insignias were spotted. It was like a sparsely attended fantasy gaming convention where the signs and codes are for the in-crowd.

But it was infused with menace. Beefy security in military camo, ballistic vests, and insignias of the III% militia scanned the fringes like protective jocks watching over nerdy wards. Speakers and attendees bashed Muslims for nearly two hours. And the rally took place two weeks after murders linked to the alt right.

The protest was originally slated for Portland. It was moved after white supremacist Jeremy Christian allegedly killed two men on May 26 after unleashing an anti-Muslim tirade against two women of color on public transit. In April, Christian was filmed yelling “Die Muslims” and throwing Nazi salutes at an alt-right event in Portland organized by “Patriot Prayer” leader Joey Gibson, who was at the anti-Sharia rally.

The Seattle rally went off without an indiscriminate police attack like one in Portland the previous weekend. But behind armored riot police and metal barricades was a new crop of extremists.

Interviews with eight attendees reveal a process of recruitment that begins with individuals attracted to Trump’s nativism and Islamophobia. They are radicalized by the lurid race fantasies of internet personalities. Next they jump from the online to the real world by associating with an extremist group. Then they gather under the banner of free speech to flex strength and preach hate.

All eight said Seattle was their first rally or they have been active only since Trump’s victory in November. They express antipathy toward Muslims, undocumented immigrants, and antifa, the name taken by anti-fascist leftists. Speakers and attendees obsessed over women’s sexuality, conflating Sharia with honor killings, female genital mutilation, child marriage, and pedophilia.

In actuality, the use of Sharia ranges widely in Muslim-majority countries and usually applies only to family and inheritance law, according to Intisar Rabb, a legal scholar. She says under the U.S. system of jurisprudence, “there is no threat that Sharia, or any other religious law, will supersede the laws of the state.”

As for female genital mutilation, it’s rare in the Middle East, practiced mainly across Central Africa, and nearly as much by Christian communities as Muslim ones.

However factually challenged the anti-Sharia message, those in attendance lapped it up. That is the danger. Previous alt-right events in Berkeley, Portland, and Seattle have served as focal points of violence. Seattle’s rally might have included the next Jeremy Christian.

Chris, 27, wore a tee shirt bearing a rainbow-version of the Kekistan flag. He said, “Islam is not a peaceful religion. Sharia law does nothing for women.”

ACT for America founder Brigitte Gabriel, recently welcomed to Trump’s White House to “share their ideas,” has said a “practicing Muslim, who believes in the teachings of the Koran, cannot be a loyal citizen to the United States,” and “Islamic terrorists … are really just very devout followers of Muhammad.”

The alt-right foot soldiers echo these ideas in cruder terms. Chris said, “Wherever they are, Muslims are taking over.” He said of refugees from the Middle East, “People coming here are fighting-age males for Jihad, to establish a caliphate.” And, “In their doctrine, Muslims are calling for violence. They support pedophilia.”

Dana Cruz, 67, a retired sheetmetal worker from Indianola, Washington, said, “Islam is like a cancer. Islam is not compatible with the United States.” Like all the other attendees, Cruz could not say where Sharia law existed in the country. He eventually admitted he was protesting something that doesn’t exist.

Cruz said Seattle was his first alt-right rally, and he listened to commentators like Glenn Beck and the anti-Muslim Mark Levin. Cruz said Dearborn, Michigan, which has a significant Muslim population, is a “no-go zone” where “If you are an infidel, you better not go to areas in Dearborn.”

Pressed on details, Cruz claimed he saw videos where non-Muslims were chased out of Dearborn by rock-throwing mobs as cops stood by. When asked how this could be happening with no public outcry or action taken by any level of government, Cruz stood silent. He then said he needed to get more signatures for his petition to pass a bathroom bill in Washington so “Grown men can’t take showers with little girls.”

Jacob, 26, who came from Oregon for the rally with members of the Northwest Trump Alliance for Change, said, “Sharia is a problem for the women.” Seattle was his fifth alt-right event, all in the last few months. When asked where Sharia existed in the United States, he struggled to name any town or city and grumbled that he could not remember “100 percent of everything I read.”

Jacob, who said he was Mormon, was opposed to “religious extremism.” When asked about laws pushed by Christian Evangelicals to ban abortion, he said, “It’s murder.” He said when women get pregnant after consensual sex, “Men have rights to half their womb.” He added, “If you don’t want to get pregnant, take it in the ass or swallow a load.”

Marcelino Cervantes, 18, who attends high school and serves in the National Guard, said he watched Alex Jones and Seattle was his first protest. When asked where Sharia law existed, he told of a town in Montana he had read about on the internet. “You don’t even feel like you are in America. There’s people in burqas. Businesses get taken over. They force them out.”

Most rally-goers said they were against extremism, not all Muslims. But many let their guard down after a few minutes of conversation. Cervantes said of the anti-Sharia event, “It’s a rally against their beliefs.”

Cameron, 24, who works at a QFC in Seattle, said his flag wasn’t racist because it “Had four K’s, not three.” He was against “religious extremists dictating laws” and said “Islam needs reform.” He said racism is real. “It affects white people.” He explained “Affirmative action is a form of racism.” Seattle, too, was his first protest, and he listed Ben Shapiro, Sargon of Akkad, and Stephen Crowder among his favored sources.

The anti-Sharia rally had barely enough women to populate a Smurf village. But they had the same message. Sheri Brown, 42, a substitute teacher in Seattle schools, said she joined the rally because “Women are in slavery in Saudi Arabia.”

Speakers included numerous people of color cast in an alt-right minstrel show in which they declared their love for America while castigating Islam. Nearly a dozen men of color attended as well.

That might seem perplexing given the overt racism of Trump and the alt right. Scholars Daniel HoSang and Joe Lowndes call it “multicultural white nationalism,” meaning some minorities identify with white nationalism.

The alt right is also deeply patriarchal, which helps it bind and recruit across races. A strong undercurrent of the anti-Sharia rally was misogyny. Historically, men have obsessed with women’s sexuality under the guise of protecting it. In the Jim-Crow era, a quarter of lynchings involved Black men accused, almost certainly falsely, of raping white women. Same with the anti-abortion movement, which has always been backed by religious and far-right male leaders.

The alt-right warriors who envision themselves as defenders of fragile women from hijabs, genital mutilation, and child marriage cut two ways. There are always some women worth defending and others who must be eradicated. It is probably no coincidence that Jeremy Christian verbally assaulted two young women of color, one wearing a hijab, with racist epithets and threats of violence.

There have been at least five hate-crime murders linked to white supremacists since Trump came to power. It’s the tip of the iceberg of more than a thousand hate crimes since then. And that number may be a vast undercount given how many people of color in Portland alone have told of racist abuse that was never reported.

It would be an overstatement to say the alt right is a mass movement. They are on the fringes of society and reality. But they are growing, have backing from the White House and police units, and are increasingly dangerous.