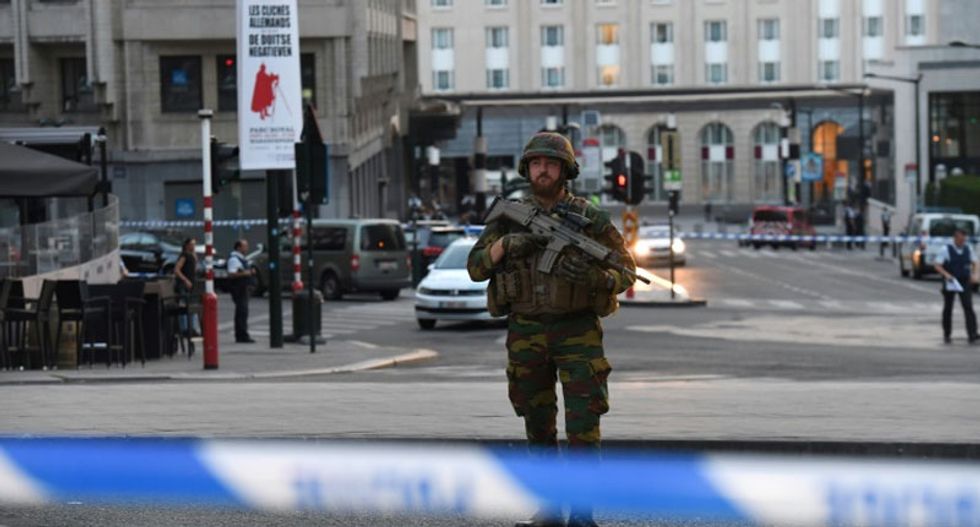 A soldier stands alert in a cordoned off area outside Gare Central in Brussels on June 20, 2017, after an explosion (AFP / Emmanuel DUNAND)

Belgium said on Wednesday a Moroccan man carried out a foiled terrorist attack with a nail bomb at a busy Brussels train station, the latest in a wave of attacks to hit Europe.

The 36-year-old man, identified only as O.Z, shouted "Allahu Akbar" and tried to detonate a suitcase in a group of passengers at Brussels Central station before a soldier shot him dead on Tuesday.

The suspect, from the largely immigrant Brussels neighbourhood of Molenbeek which has been linked to a number of previous attacks, was not known to police for terrorism offences.

"It could have been much worse," Belgian federal prosecutor's spokesman Eric Van Der Sypt told a news conference. "It is clear that he wanted to cause more damage than he did."

Belgian Prime Minister Charles Michel said a "terrorist attack has been prevented" in the city that hosts the EU and NATO headquarters.

But he said that while security would be stepped up, the country's terror alert level would be kept stable.

"We are not allowing ourselves to be intimidated by terrorists," he added.

The blast came a day after a man mowed down Muslims near a mosque in London, and a suspected Islamist on a terror watchlist rammed a car laden with weapons into a police vehicle in Paris.

Brussels has been on high alert since suicide bombers struck Zavantem Airport and the Maalbeek metro station near the EU quarter in March 2016, killing 32 people and injuring hundreds more.

The Islamic State group claimed the attacks, which were carried out by the same Brussels-based cell behind the November 2015 suicide bombings and shootings in Paris which left 130 people dead.

In Tuesday's incident, the man failed to cause any casualties.

He entered the station and twice approached a group of around 10 passengers, the second time standing in the middle of them, prosecutors said.

"He grabbed his suitcase while shouting and causing a partial explosion. Fortunately nobody was hurt," Van Der Sypt said.

"The suitcase immediately caught fire. The man then left his luggage burning and went down to the platform in pursuit of a station master. Meanwhile the bag exploded a second time more violently. This bag contained nails and gas bottles," he added.

"The man then returned to the hall where he rushed to a soldier shouting 'Allahu Akbar' (God is Greatest). The soldier immediately opened fire and hit the individual several times."

The man, who died instantly, was not wearing a suicide belt, contrary to some Belgian media reports, he said.

"He was not known to the authorities for any terrorism connection," Van Der Sypt said, declining to give the man's full name while the investigation continues.

Interior Minister Jan Jambon underlined what a close call passengers had when he said the "big explosion did not happen."

Police later raided the man's home in Molenbeek, home to some of the jihadists involved in the Paris and Brussels attacks.

Belgium would keep its terror alert level at three on a scale of four, Michel said after chairing a meeting with his national security council.

Events in Brussels including a concert by rock band Coldplay were set to continue, although authorities said there would be extra security and warned people not to bring backpacks.

The busy Central Station in the heart of Brussels, which sits just beside the Grand Place tourist attraction, reopened around 8:00 am (0600 GMT) Wednesday, railway authorities said.

Witness Nicolas Van Herrewegen, a railway employee, said he had gone down to the station's mezzanine level on Tuesday night after hearing somebody shouting.

"Then he yelled 'Allahu Akbar', and he blew up a wheeled suitcase," Van Herrewegen told reporters.

"It wasn't exactly a big explosion but the impact was pretty big. People were running away."

He described the suspect as well built and tanned with short hair, wearing a white shirt and jeans.

Soldiers have been deployed at railway stations and landmark buildings in Belgium since the Paris terror attacks, when a link to Brussels was first established.