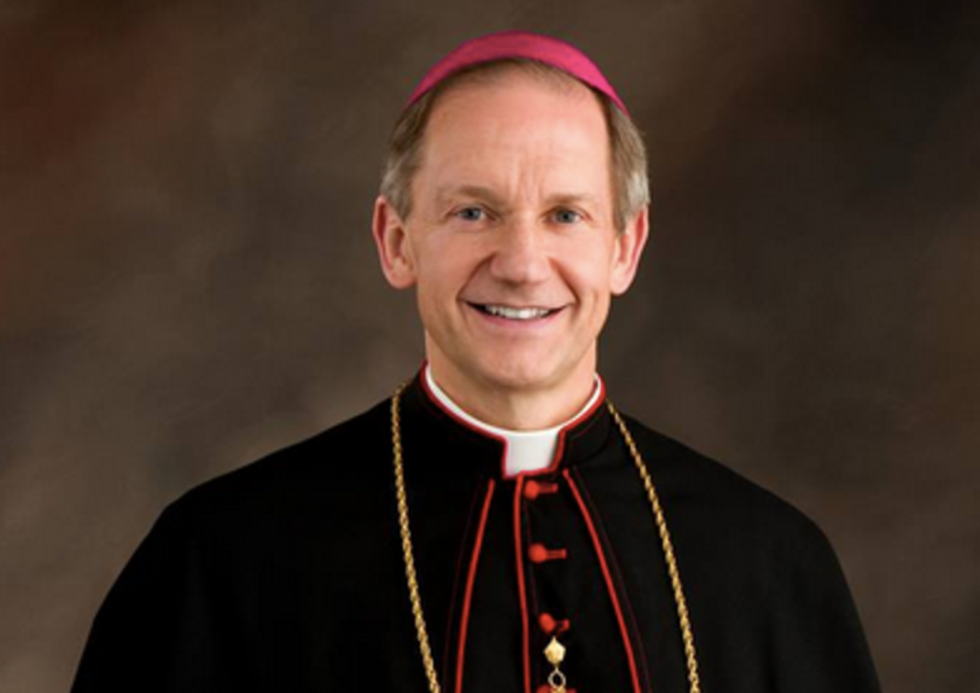 A Catholic bishop in the Springfield, Illinois, issued an edict this week forbidding priests in his diocese from giving Holy Communion or funeral rites to same-sex couples.

The Daily Beast reported that Bishop Thomas Paprocki also ordered priests in the district not to baptize children from LGBTQ families.

"I the Most Reverend Thomas John Paprocki," he wrote, "by the Grace of God and favor of the Apostolic See, Bishop of Springfield in Illinois, do hereby promulgate the following norms as diocesan policy with respect to same-sex marriage and related pastoral issues."

He then forbade "the solemnization and blessing of same-sex marriages," "Reception of Holy Communion" by LGBTQ Catholics, places strictures on "The Sacraments of Initiation" -- which include baptism and confirmation -- and forbade priests from performing funeral rites on the LGBTQ dead.

"Popricki calls for priests in his diocese to 'deprive' those living openly in same-sex marriage of ecclesiastical funeral rites, which include burial and last rites, 'unless they have given some signs of repentance before their death,'” wrote the Daily Beast's Barbie Latza Nadeau.

"Paprocki is a hardliner who famously performed an exorcism when Illinois passed a same-sex union bill in 2013, telling the Chicago Tribune at the time that Pope Francis’s words about tolerance of gay priests—'Who am I to judge?'— were being misrepresented in the state legislature to suit politics," she continued.

Pope Francis has refused to issue specific guidelines on the issues of same-sex marriage and other issues faced by LGBTQ Catholics, instead "giving local pastors wiggle room when it comes to tending their flocks," said Nadeau.

Bishop Paprocki has aligned himself with a retrograde wing of the church that wants to return to Catholic teachings that same-sex relationships are "immoral" and the LGBTQ people are "intrinsically disordered."

He also questioned whether children being raised by same-sex couples should be allowed to attend Catholic schools, not explicitly banning it, but he stipulated, "(P)arents and those who legally take the place of parents are to be advised that their children will be instructed according to the Church’s teachings on marriage and sexuality in their fullness.”

The harsh terms of the decree have been criticized by reformers working to modernize the church and reverse its rapidly declining membership numbers.

Francis DeBernardo, Executive Director of the New Ways Ministry -- a group dedicated to bridging the divide between the church and LGBTQ Catholics -- said in an open letter to Paprocki, "Your ‘Decree Regarding Same-Sex “Marriage” and Related Pastoral Issues’ has been received by Catholics across the nation with one of the strongest negative reactions that I have witnessed in almost 25 years of ministry with the LGBT community in the Church."

"While there have been many harsh and negative statements from church leaders over the past quarter century, I think the reason that people responded so emotionally to your edict is that it addresses two very core Catholic areas:  sacramental experience and life/death issues,” DeBernardo said.

“This is reminiscent of the appalling practice of denying Communion, funerals, and burial to people dying of AIDS at the height of the epidemic," said Dignity USA director Marianne Duddy-Burke. "We want to say to Catholics of the Springfield Diocese or others whose parishes or Dioceses do not welcome them as fully who they are, there are Catholic communities that will welcome and affirm you, in the true spirit of our faith.”

In 2015, Paprocki and the Springfield diocese were rocked by allegations that two "predator priests" were allowed to victimize children for years unchecked in the district. The bishop denied any knowledge of the two priests' history of abusing young boys before they came under his jurisdiction.

The U.S. Catholic church is teetering on the verge of bankruptcy thanks to the millions of dollars paid out to victims of child sex abuse by Catholic priests. The Boston archdiocese has paid out more than 85 million dollars in 550 separate abuse lawsuits.