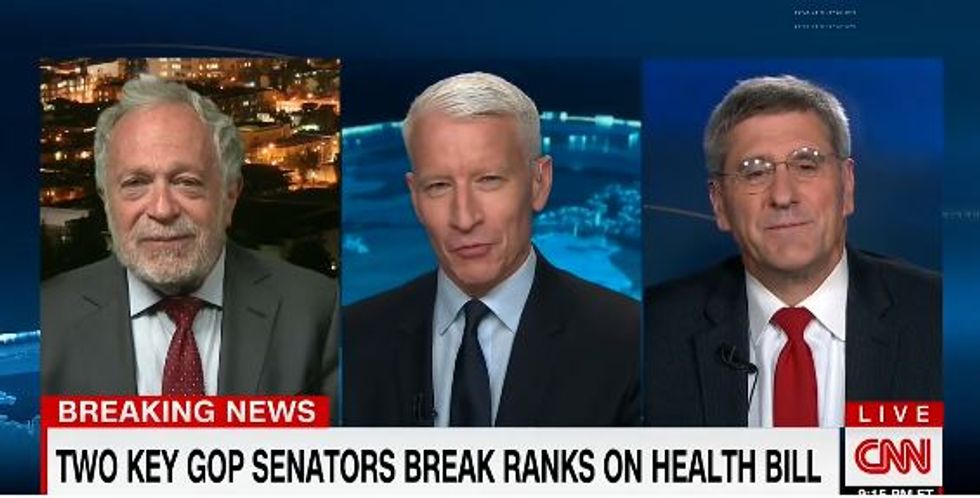 In a Monday night segment on Anderson Cooper 360, President Bill Clinton's former Secretary of Labor Robert Reich got into it with President Donald Trump's former economic adviser Stephen Moore over the harm that may be caused by the Obamacare repeal bill.

"This Republican bill is not a healthcare bill -- it's a tax cut for the wealthy," Reich said halfway through the otherwise civil segment. It was then that all hell broke loose.

As Reich went on to explain that the Affordable Care Act is "unraveling" due to the Trump administration's lack of assurances to the insurance industry and the GOP's unwillingness to fix the "slightly broken" healthcare act currently in place, Moore just shook his head.

"We haven't even talked about Medicaid," Reich said as Cooper tried to mediate.

As they began discussing how Medicaid will function under the Affordable Health Care Act, Moore began the argument that the ACA "forces people" to buy packages they can't afford -- a concept that seemed to incense Reich.

As the two men argued economic theory and risk pools, Reich seemed fed up with Moore's arguments about the mandatory enrollment aspect of the ACA.

"Oh, please. Steve Moore, you're just blowing smoke," Reich concluded. "We've talked about this for years, you don't know what you're talking about."

Watch the entire segment below via CNN.