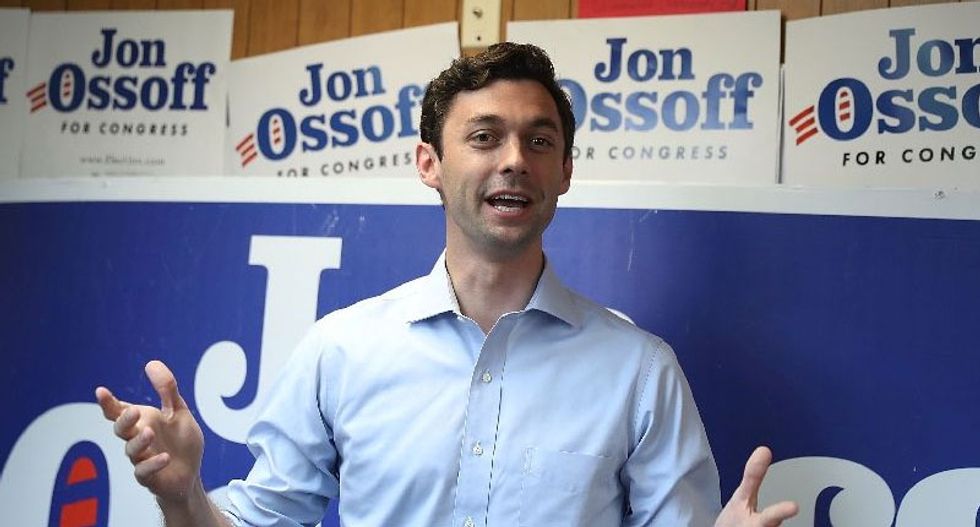 Voters head to the polls in the state of Georgia Tuesday to decide the most expensive US congressional race, a $60-million political brawl where a Democratic novice could score an upset in a conservative stronghold and strike a blow against the presidency of Donald Trump.

The race -- seen as an indicator for next year's mid-term elections -- appeared virtually deadlocked as both candidates sprinted to the finish, polls showed.

Republicans are facing a sobering reminder of their president's poor approval ratings, as 30-year-old centrist Democrat Jon Ossoff, a filmmaker and onetime political assistant, clings to the narrowest of leads.

With Democrats potentially striking the first blow against Trump in 2017, the race has drawn substantial national attention -- and vast outside contributions to both candidates.

"It's a neck and neck race, and it's all about turnout now," Ossoff told WSB television Monday. "That's why we're so focused on get out the vote" operations.

"Democrat Jon Ossoff, who wants to raise your taxes to the highest level and is weak on crime and security, doesn't even live in district," he tweeted just before sunrise Tuesday.

"KAREN HANDEL FOR CONGRESS. She will fight for lower taxes, great healthcare strong security-a hard worker who will never give up! VOTE TODAY," he then added.

The Democrat won the first round against several candidates in April, but fell just shy of outright victory.

The June 20 runoff quickly became the most expensive US House race in history, with the campaigns, political action committees and other outside groups raising nearly $60 million, according to government reform and ethics group Issue One.

Republicans have held Georgia's sixth district since 1979. But as an increasingly well-educated, diverse suburban district it is exactly the kind of territory which Democrats need to flip if they want to gain the 24 seats necessary to reclaim the House of Representatives in 2018.

"If the Democrats win the Georgia Sixth it should be a wake-up call to the Republican Party," GOP strategist Rick Tyler, ex-spokesman for Senator Ted Cruz's 2016 presidential campaign, told MSNBC.

Some observers were also eyeing the race for clues into how voters perceive the Republican health care bill currently making its way through Congress.

Handel has aligned herself with Trump, who campaigned heavily on repealing Obamacare. If she loses, Republicans in swing districts may be forced to reassess their positions on health care.

Tuesday's runoff is the third chance opposition Democrats have to win a House seat since Trump took office.

Special congressional elections in Kansas and Montana -- also to replace Republicans who joined Trump's team -- were seen as a chance for Democrats to score first strikes against the administration.

But with Democrats falling short in those races, and the Republican expected to win in South Carolina -- a second state which is also holding a special congressional election Tuesday -- all eyes have turned to Georgia.

Should Democrats fail to convert at least one of the special election seats, it could be a demoralizing blow for administration opponents who have seen these races as early tests of the national strength of an anti-Trump movement.

The shooting of Republican congressman Steve Scalise -- who remains hospitalized in serious condition after being shot in the hip -- last Wednesday in Washington however has cast a shadow over the Georgia race.

Both candidates have reported receiving threats, prompting heightened security in the final days of the race.