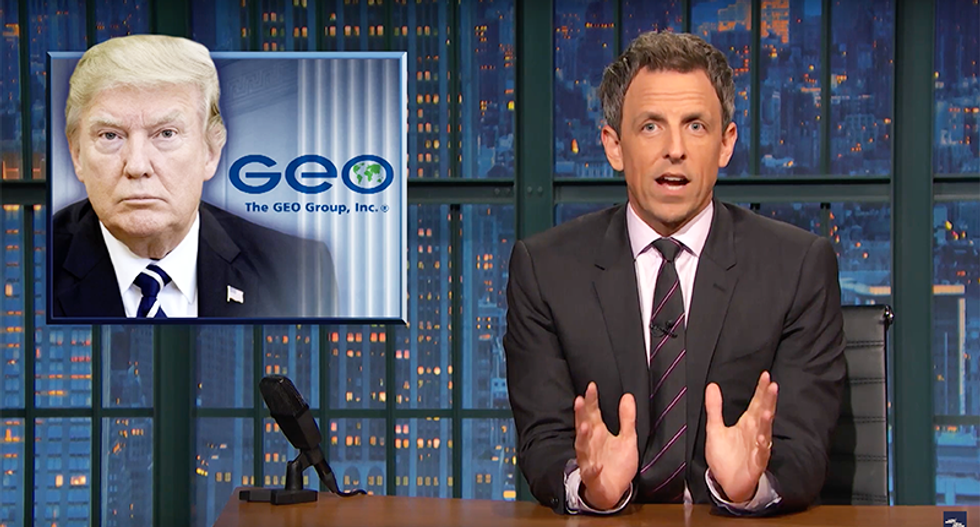 In a John Oliver-style expose on President Donald Trump's ties to private prisons, "Late Night" host Seth Meyers attacked the shocking examples of Trump throwing contracts to those who give him cash.

Former President Barack Obama had his Justice Department begin to phase out the use of private prisons. These prisons had contracts with the state and federal government and were paid by the prisoner it housed. So, the company lost money when prisoners were released. A report revealed that they were the least cost-effective institutions and were wasting millions in taxpayer dollars. Government prisons, by contrast, had a vested interest in ensuring people in prisons were rehabilitated and could become productive taxpayers instead of repeat residents.

Meyers brought up a Pennsylvania scandal in which judges were caught getting kickbacks from private prisons for sentencing juveniles to years in prison for stealing things like nutmeg and posting unflattering photos of a principal online.

But when Trump was asked about specifics around prisons Meyers said that it seemed he didn't know what he was talking about and simply referred to it as "a disaster."

Private prisons doled out chunks of cash to the Trump campaign and their candidate followed up by turning private prisons into deportation holding cells for ICE. After giving $100,000 to a pro-Trump PAC and $250,000 to Trump's inaugural committee, the private prison company GEO Group scored a $100 million contract from the administration to build the first ever immigrant detention center in Texas.

"If you're surprised that a private prison company donated to his inauguration, remember his campaign slogans were 'build a wall' and 'lock her up,'" Meyers noted. "That's a recipe for building a prison."

Another company, CoreCivic, was forced to rebrand the company after a Mother Jones reporter went to work as a corrections officer to uncover the disastrous operations. They ultimately were forced to change the entire company identity and hire a PR firm to try and go after the reporter -- who they accidentally emailed their entire communications strategy to.

Stock plummeted in CoreCivic after Obama announced he was stopping all government contracts with the company, but since Election Day, it has soared.

"It may be a gift for the prison industry but not for taxpayers who are funding these facilities," Meyers said. "According to a report, 'we can expect little in terms of accountability in return for footing the bill.'"

He went on to note that secrecy around this is even worse -- in large part because adding "secrecy" to "prisons" is always a bad idea. The United States already has a greater number of its citizens behind bars than any other country. Meyers said, as Trump would put it, "it's a complete disaster."